In 2006, I did a series of experiments with healer/researcher, Dr. William Bengston, looking at the effects of hands-on healing and distant healing on tumors in mice.  One of the areas I wanted to study was magnetic field (MF) activity during energy healing.  I was intrigued by the results of two studies, namely Zimmerman (1985) and Seto et al., (1992), which showed MF changes during energy healing.  In a preliminary study using a SQUID detector in a magnetically shielded room, Zimmerman (1985) observed MF variations in the range of 7-8Hz adjacent to the hands of a Therapeutic Touch practitioner.  Seto et al. (1992) reported magnetic field oscillations adjacent to the hands of 3 out of 32 Qigong practitioners.  So, in the experiments with Dr. Bengston, I wanted to see if we could detect any magnetic field oscillations, and possibly replicate the Zimmerman and/or Seto results.

The trick, of course, was finding the right magnetometer (also called a gaussmeter) to measure the MF activity, and then, finding a recorder and software to record MF activity continuously, like an EKG (electrocardiogram).  Seto and colleagues reported that the MF activity was in the low milligauss range, which helped narrow the search to “sensitive” magnetometers able to measure low-intensity fields.  The extra low frequency of the magnetic field oscillations (i.e., 7 -8 Hz) narrowed the search still further, as most commercially available magnetometers filter out frequencies below 20Hz.  Another key requirement was being able to connect the magnetometer to a computer (“recorder output”), so that I could record the MF activity continuously.  Searching online, I found a sensitive “geomagnetometer” at Integrity Design & Research Corporation, which met all of my requirements.

To measure the magnetic field activity continuously, I hooked up the geomagnetometer (Integrity Design & Research, IDR-321) to a data recorder (iWorx IX-214) attached to a computer laptop with recording software (Labscribe 1, iWorx).  I tried a less expensive data recorder and software, but the time-response characteristics were not good enough to faithfully represent the MF changes.  iWorx specializes in equipment and software for physiology experiments and teaching, including EEG and EKG, so the quality of the recording is good for low frequency signals.  In the majority of my experiments, the magnetometers are located in the room where energy healing is occurring, and the data recorder and laptop are located outside the room to minimize electronic noise in the recording.  To that end, I also use high-quality shielded BNC cables between the magnetometers and data recorder.

Later, after Dr. Bengston had returned to New York, we scheduled a distant healing session with him, during which he would send healing to our mice in Indiana.  We placed the magnetometer probe in the middle of the mouse cages, wondering if we could detect magnetic field oscillations as he sent distant healing to the mice.  I had two students working in my lab at the time, Danny LaPlante and Charlie Cochran, and a lab technician, Dan Zhou.  The four of us sat watching the MF activity, and shortly after the healing session began, magnetic field oscillations appeared on the screen.  After the session was over, Dr. Bengston called us on a cell phone, telling us that he had felt energy move at the same time (within a minute or two) that we had seen the magnetic field oscillations.  It was very exciting, but the question immediately arose as to whether these oscillations were specific to this room, or if they occurred randomly everywhere.

I immediately ordered three more magnetometers, so that we could test other rooms at the same time.  The tumors in the mice were shrinking rapidly at this point, so there was not much time.  In one experiment, we recorded MF activity in 4 different rooms at the same time.  One room was designated, Blue1, which contained the mice Dr. Bengston was treating; another room, White, contained normal mice (with no tumors); room Blue2 contained mice with tumors, but no treatment by Dr. Bengston; and the fourth room, Office, contained no mice.  During this experiment, we recorded MF activity continuously for approximately 3 hours. 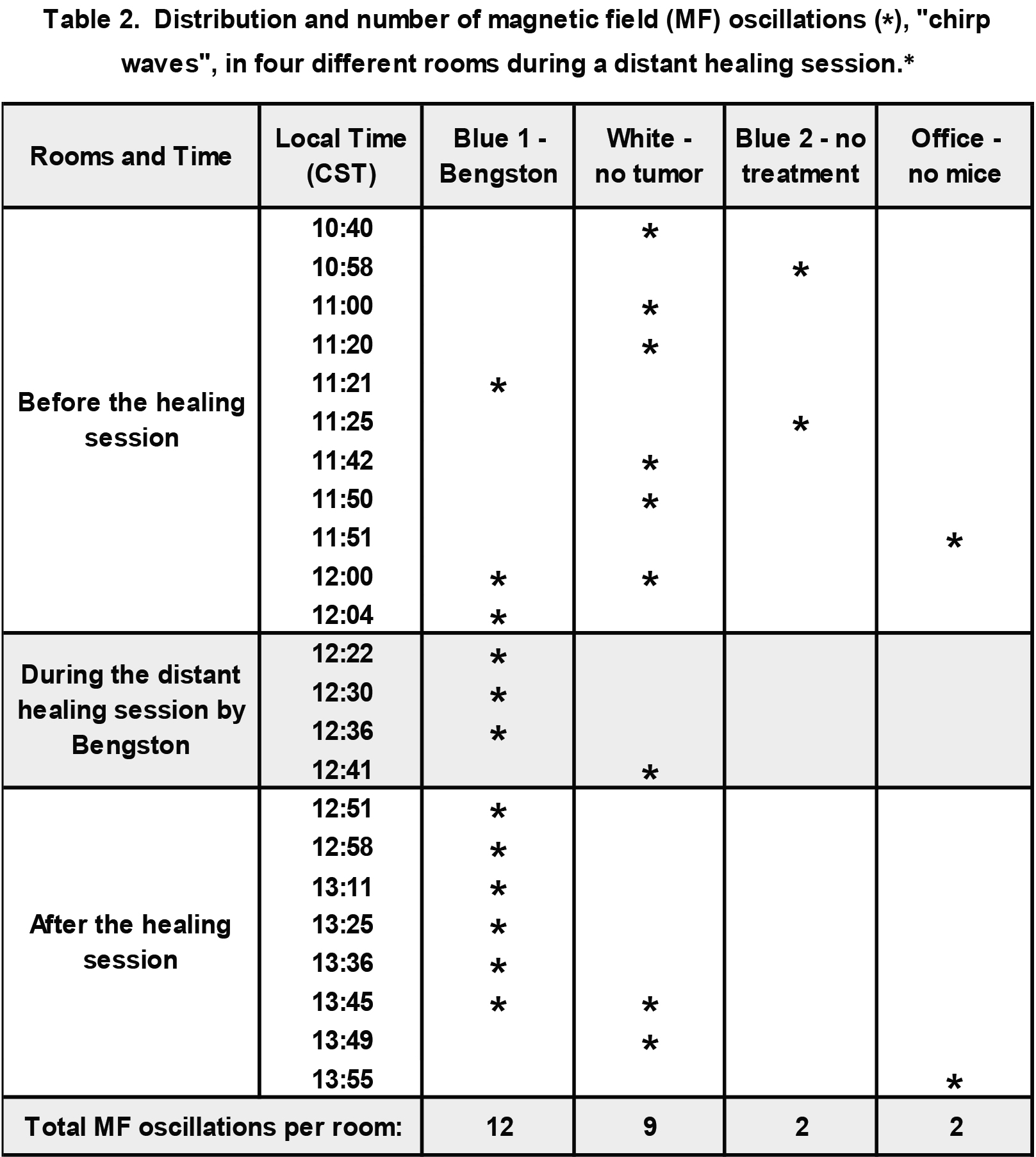