After recording magnetic field (MF) activity during hands-on and distant healing with Dr. Bengston, I became curious as to whether MF oscillations were present during energy healing therapies such as Healing Touch or Reiki.  I had taken three weekend courses in Healing Touch (Levels 1 – 3), and had met another local Healing Touch student, Katie Petersen Baumann, who had taken Level 4.  I was also in contact with a Reiki healer.  I arranged for the three of us to get together at a medical clinic where we could practice some healing sessions together while recording MF activity. 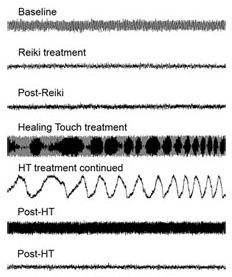 In the second session, both Katie and I gave Healing Touch to the Reiki healer.  Katie and I felt heaviness in the biofield of the healer, particularly in the head region.  A friend of hers had recently died, and she was grieving the loss, which we perceived as ‘denseness’ or ‘heaviness’.  We started with Chakra Connection, and then Magnetic Clearing, eventually clearing the heaviness from her biofield.  The magnetic field activity during this session included MF oscillations similar to what I saw with Dr. Bengston, but the MF waves were much higher in amplitude and sustained, continuing for some time after the HT session was over.  The MF oscillations were pronounced near her heart region, but nonexistent near her feet, which led us to record exclusively near the heart in all subsequent recordings.

Not sure whether these waves were “real” or artifact, I contacted Judith Villegas, a certified Healing Touch practitioner (now an instructor) in Indianapolis about recording MF activity during two HT sessions with her clients.  At this time, Judith was practicing HT at a pain clinic.  The first HT session with Judith and a “client” colleague occurred in the pain clinic conference room with a portable massage table.  Although there were some low-amplitude MF oscillations during this session, it was not an optimal healing environment, and puzzling to me, there was high background noise in the MF recording.  For the second session, with another client colleague, we moved to the exam room where Judith regularly gave Healing Touch.  Again, the background noise was very high, but the HT session seemed to go well, with two energetic “releases” by the client.  Interestingly, the two releases felt by Judith, one occurring on the left side of the client and the other on the right side, matched the timing and the left/right side of the two MF waves.  Was the MF wave evidence of an energetic release?   That would be exciting, if true.  Also, I wondered if the noisy background in the MF recording was due to conditioning of the space by so many pain patients over decades.

Sharon (Healer E) gave Healing Touch to four different clients in a single day at the Terre Haute clinic (described in a recent paper).  The first client (Client 5) was a nurse on night shift – she presented with work stress and a painful leg varicosity.   During the pre-treatment energetic assessment, Sharon felt abnormal sensations in the client’s biofield, including static in the head area, and prickly, tingly sensations over most of her body with congestion over the right upper leg.  Magnetic field oscillations developed on both sides beginning about 22 minutes into the session, and steadily increased in amplitude, continuing into the second session with Client 6.  Client 6 presented with lifelong asthma.  During the pre-treatment energetic assessment, Sharon described a “remarkably heavy, thick, contracted field in the throat and shoulder area” of the client.  She reported that it took her, “a long time to clear and expand [the] field” during this session, using Hands-in-Motion, Ultrasound to the upper chest and lungs, and Etheric Clearing.  The build-up in MF intensity, begun in the first session, finally released as high-amplitude MF waves.  The MF activity gradually returned to baseline during the lunch break. 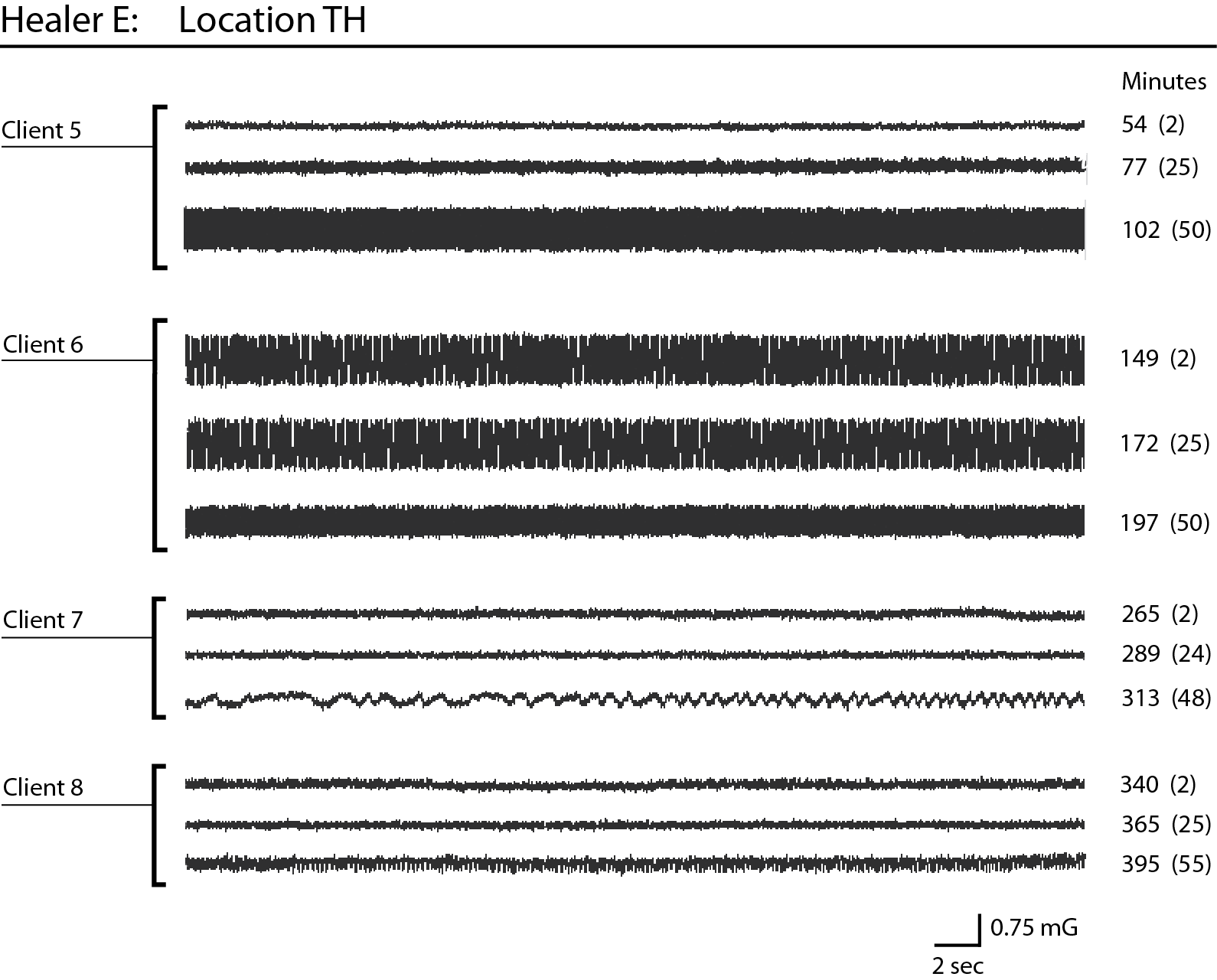 In the third HT session, Client 7 presented with mild sinus congestion, but otherwise good health.  Similarly, Client 8, who had had multiple HT sessions previously, also presented with mild complaints.  In her pre-energetic assessment with Client 8, Sharon observed that all the chakras were open and the biofield was “clear”.  The magnetic field activity in both of these sessions was relatively quiet with only a few low-amplitude waves.

A pattern started to emerge in these experiments:  1) When the healer felt congestion or heaviness in the biofield, and then cleared it, high-amplitude MF oscillations developed, beginning about 20 minutes into the HT session; 2) High-amplitude MF waves in one HT session ‘spilled over’ into the next session, suggesting that the energetic climate of one session could affect the next client session; 3) Relatively quiet MF activity was observed with healthy clients with no biofield congestion.