While reading about kundalini experiences, I noticed similarites between qigong and kundalini, particularly, kundalini and the microcosmic orbit meditation, or small circulation qigong, which developed from ancient traditions of Buddhism and kundalini yoga.  The microcosmic orbit technique develops the main energetic circulation pathway of the body, increasing Qi or prana, leading to better health and spiritual enlightenment.  Modern kundalini yoga does not talk about the microcosmic orbit, but yoga practitioners are familiar with the powerful internal energy, coiled at the base of the spine like a serpent, which when awakened, rises up alongside the spine to the head, leading to enlightened states of consciousness.

Penny Kelly talks frequently about her kundalini experiences, and has described them in detail in her book, The Evolving Human.  Here are the kundalini symptoms she experienced, in order of occurrence:

What stood out to me in her account was the ‘backward breathing’.  This type of breathing is described by Qigong practitioners – where the abdomen constricts during inspiration and expands during exhalation – the reverse of how the body normally responds during breathing.  Here is a diagram of reverse breathing from Dr. Yang’s book, Qigong Meditation:  Small Circulation: 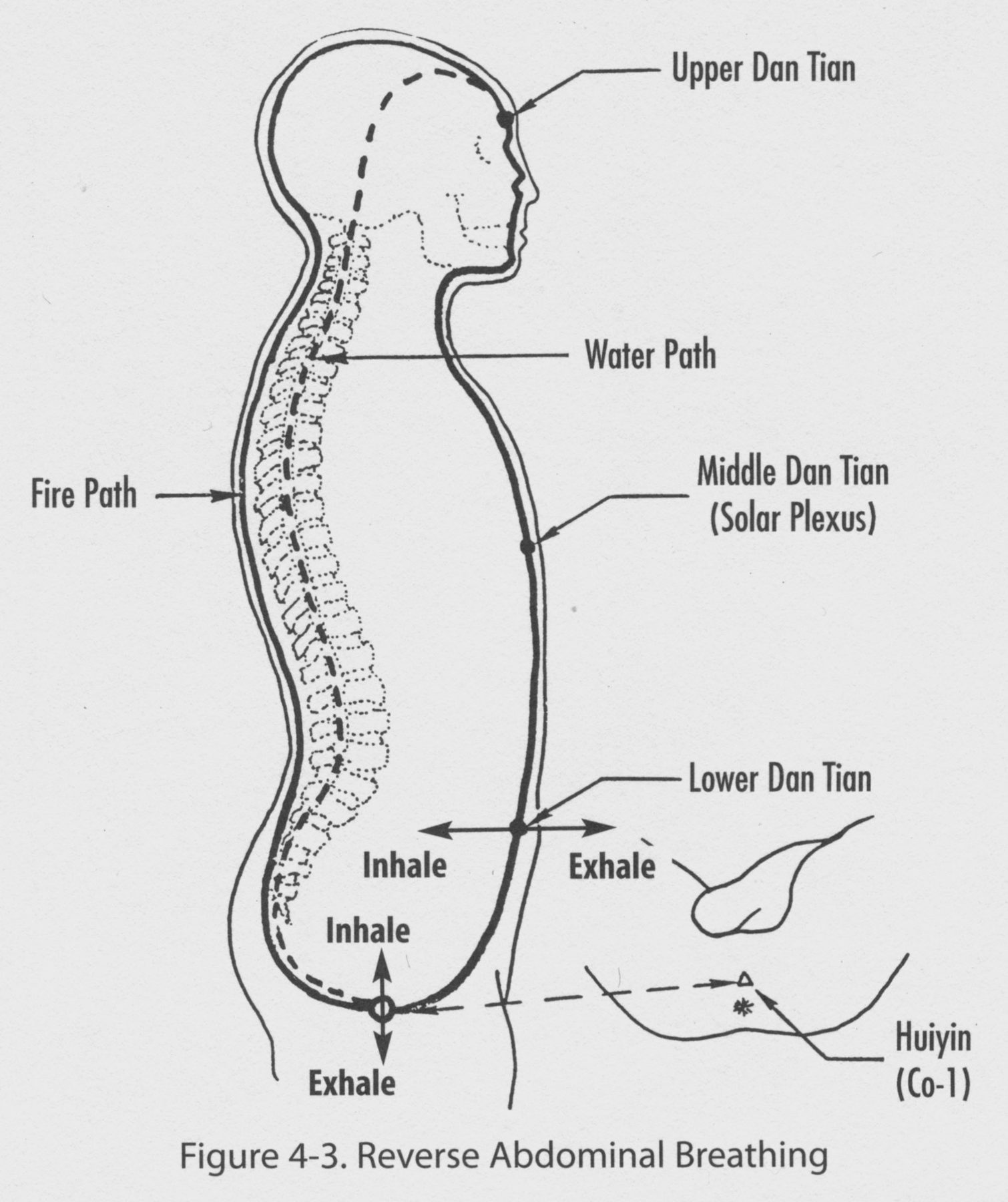 As to what triggered her kundalini experiences, Penny Kelly observes that, “my emotional state was often one of intense desire but not necessarily sexual desire”.   She found that focusing on a problem brought on the desire for a solution, which led to sensuousness and then the spontaneous physical experience of kundalini.  In terms of qigong, her strong intentions triggered reverse breathing which powerfully energized her body.  During reverse breathing, Qi moves out of the main channels into the skin and bone marrow, which can account for the intense feeling of heat during kundalini.

Looking at other published accounts of the kundalini energy flow, I noticed that it is not just an upwards flow, but that it moves to the head and then descends the front of the body.  This pattern is identical to the flow of energy in Small Circulation qigong, also known as the microcosmic orbit, illustrated below:

Here are examples of the kundalini energy path described by experiencers in case studies documented by Dr. Lee Sanella:

Curiously, many cases describe pain or aching in their left big toe as a precursor to other symptoms, with energy then moving up their leg and along the spine.  Itzhak Bentov also found that the bodily symptoms of kundalini usually start at the left foot or toes, either as a mild tingling stimulus or cramps.  This may be one area where qigong and kundalini differ, as it is recommended to cross or bend the legs during small circulation qigong, to better control the Qi within the microcosmic orbit, as the legs are a source of strong Qi.

Kundalini symptoms can be severe, with spontaneous body movements and psychic openings.  Many Western psychologists and psychiatrists recognize the physio-kundalini syndrome as a spiritual emergency.  Qigong practitioners, on the other hand, describe something comparable to kundalini syndrome, “qigong deviation”, an aberration in the normal flow of energy due to incorrect practice.  Thus, an understanding of both qigong and kundalini may help in the treatment of kundalini syndrome.