One day I received a book in a book order which I had not ordered.  Titled, The Handbook for the New Paradigm, it contains futuristic predictions and advice for impending societal and Earth changes.  The author, George F. Green, states that he received these channeled readings from Benevolent Beings. 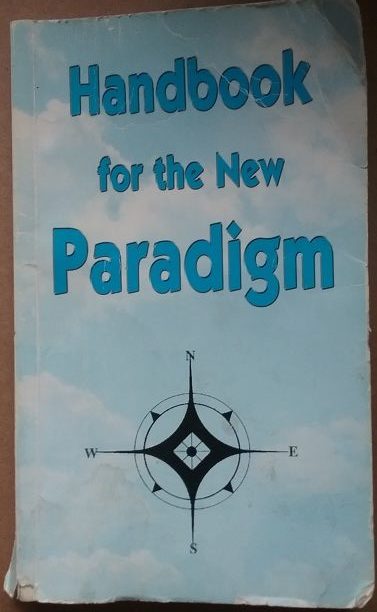 While sick with a bad cold one evening, I picked up the Handbook for the New Paradigm, and started reading the Preface.  I could feel the “voice” of the writer or writers – their energy, their essence – very strongly.  After falling asleep, I found myself in a kitchen with two beings dressed in white.  Their faces and hands were radiating Light – so much Light that their features were obscured.  One was standing and the other was sitting.  Not knowing what to say or do, I popped back out of this ‘dimension’.  My first thought upon awakening was that these were the Benevolent Beings who had channeled the book.

Robert Monroe in his books describes INSPECs, Intelligent Species, which he met on his out-of-body journeys.  His INSPEC friends were “brightly glowing” and their “bright light” was difficult to withstand at first.  One of the INSPECs tells Monroe that he has, “the same radiation”.  Monroe learns how to, “obtain a fix on any radiation”, and then he is able to connect with an INSPEC or deceased human nonlocally.  I think I was able to connect with these beings because I felt a “lock” on their radiations.

According to The Handbook for the New Paradigm (HNP), “the goal of the new paradigm…is the transition of humanity from victim consciousness into self-empowerment, which will result in a rise in the vibratory emanation of the planet and its inhabitants.”  The Benevolent Beings give the intriguing message that humans are capable of living and working together without hierarchy of any kind.  No 1%, no power structure.

One message is emphasized and repeated multiple times:  For humans to conceive and complete the writing of a statement of purpose [for the planet].

According to HNP, humans must, “create a clearly stated purpose that is appealing to all of humanity”.  Further they state, “Defining the purpose will not be an easy process.  Many versions will be proposed before ideal wording can encompass it.”  This sounds like a crazy idea – to write one statement of purpose for all the humans on the planet as a whole.  But they tell us that it will bring us together and help us to manifest the new paradigm.

Corporations and nonprofits often write down their purpose in a mission statement.  So I see the ‘statement of purpose’ as a Mission Statement for Planet Earth.

So, here is my first stab at writing a statement of purpose (and a Vision statement as well):

As One People, One Planet, we share our gifts and assist the young in developing their gifts, as we guide the unfoldment of evolutionary potential among all living things.

To become a peaceful and enlightened planet.

Why have I focused on the personal development of individual “gifts”?  I believe this gets at the heart of inequity on our planet.  The wealthy and well-connected are able to express their potential and gifts, but the poor and uneducated have limited opportunities to develop and express their potential.  Our institutions and societies focus on preparing us to “fit in” – we are cogs in large corporate, institutional, national entities.  This stunts/slows our personal growth and the growth of humanity as a whole.  By supporting each other in fully realizing our potential, then we will be able to guide the development, and sustainability, of the planet as a whole.  This also fits in with our need for self-empowerment and self-responsibility – which are emphasized in HNP.

We each have different perspectives and each of us needs to try writing the Earth mission statement.  Slowly, our different versions will merge, and then we will clearly see our collective purpose here on Earth.

Feel free to share your version of Earth Mission and Vision Statements in the comments section, if you like.