I first became aware of ‘thoughts as things’ while in 8th grade.  My math teacher, Sister Loy, started class with mental arithmetic.  She called out a series of numbers for us to add/subtract/multiple/divide in our heads, for example:  3 + 4 x 2 + 6 ÷ 2, and then she picked a student at random for the answer.  I really enjoyed this game.  I would shift my focus so that I could see the numbers on a virtual screen located about 12 to 13 inches in front of me.  It was my own private blackboard.  The “reality” of that invisible mental screen, and the numbers on it, has never left me, and indeed, is the beginning of my interest in ‘thoughts as things’.

Healers do this kind of visualization all the time – they shift their focus and visualize either the patient at a distance or the patient’s biofield/internal organs. For example, healers report during distant healing, “with intensive concentration I would imagine the patient in my presence as if he were before my eyes”.  Or, “I would envisage healthy organs in the place of those that were diseased”.  “The more vividly I could visualize the troubled spot”, the better.  “In my mind’s eye, I saw the patient’s body like in a photographic negative, with areas of light and dark”.

Some people see the visualizations “in” their head.  Others see the visualizations on a mental screen located about 12 – 15 inches in front of their face.  There are exceptions to this.  While giving Healing Touch to clients on a massage table, I sometimes have visualizations at the level of the client’s body, about 24 inches from my face/head.   If we think of the mind as a “lens”, then the distance to the virtual mental screen may represent the “focal length” of the mind lens.  To have a clear image on the mental screen, we “focus” our thought, like focusing a camera lens.  The virtual screen may tell us something about how the mind works.

One day, while having lunch with a group of friends at a round table, the topic turned to golf, and I suddenly had a clear, whimsical image of a golf ball with wings. I “saw” this image above the middle of the table.  Within a minute or so, one of my friends incorporated “a golf ball with wings” into his conversation, without my mentioning it.  As we were all seated facing the center of the table, I wondered if the image I saw and/or created was visible to him and the others?  Was this thought-form located at a common focal plane of the minds assembled at the table?  Did my friend unconsciously read the image, like I read the numbers on my virtual blackboard?  I have sense learned that a ‘golf ball with wings’ is a common motif in the world of golf.  Here is a Detroit Red Wings golf ball: 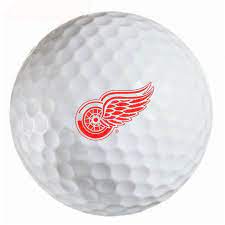 The concreteness of thought-forms can be demonstrated.  With strong focus and visualization, thought-forms may be palpable or detectable.  Robert Mermin recounts such an experience during a pantomine performance he gave to a college audience.  On the stage, he created an invisible maze of illusionary walls.  Deeply enmeshed in what he was doing, he reached out to touch a pantomime wall when his hand was suddenly blocked as if he had touched a real wall.  He says, “I was stunned and jerked away”.  Based on this experience, Mermin went on to do a series of experiments where he formed an invisible wall with his mind, and then asked his friends and students to find the invisible wall with dowsing rods, which they did.

I once created a detectable thought-form in a Reiki level 1 weekend workshop. As the workshop progressed, I became less and less happy with the “Reiki Master”, who didn’t seem to know much, and certainly did not know how to teach.  As part of the initiation process, he would take us one by one into the next room, where he would ask us to close our eyes and then he would breathe on us.  I did not particularly care for this guy breathing on me.  By the third initiation, I had had enough.  I imagined a “white Light” shield around me to protect me from his energies.  When the class gathered together afterwards, he mentioned that when he tried to send energy into me, the energy bounced off of me.  My shield had worked!  A supposed figment of my imagination had actually protected me.

According to David Spangler, if you invest an, “image with enough emotional and mental energy, particularly in the form of desire and will, you can propel that image out of your own personal subtle field into the imaginal realm. At that point it becomes a thought-form”, detectable by others.

After reading Spangler’s book Subtle Worlds, I became aware of the subtle fields associated with inanimate objects, for example, a sofa, which is the example he gives in his book.  It occurred to me that the walls inside houses contain the thought-forms that built them, but also the accumulated thoughts and emotions of the occupants.  The subtle fields of the walls are reinforced each time we walk into the room and recognize the “concreteness”, the manifest reality, of the walls.  This could be why abandoned houses deteriorate so rapidly – there is no human consciousness to reinforce the subtle fields providing the energetic framework for the house.

Another area where thought-forms are used and developed is in the practice of Magick. In Magical Use of Thought-Forms, Ashcroft-Nowicki and Brennan describe three basic types of thought-forms:  a mental construct, a magical thought-form “injected with the essence of proto-matter”, and a thought-form that contains the creator’s essence with material from the unconscious.  With practice or by accident, mental constructs may be “projected images” detectable by others.  In Magick, thought-forms may become fully developed, leading to the concept of ‘thoughts as things’.

Thought-forms and projected images would seem to be a good subject for scientific study.

One thought on “Thoughts as things”