At a meeting of the International Society for the Study of Subtle Energies and Energy Medicine (ISSSEEM) in 2005, I heard Dr. William Bengston give a presentation of his research on hands-on healing of mice with tumors.  Bengston reported very high rates (>80%) of tumor remission with his unique method of healing.

What interested me was how the tumors remitted:  the mammary gland tumors ulcerated, creating ugly black wounds, and then the tumor decreased in size until it was completely gone.  A similar process has been reported in the herbal treatment of breast tumors in humans.  Escharotic salves are applied to the tumorous breast, causing ulceration, and then shrinkage of the tumor.  I was struck by how both methods involved a similar 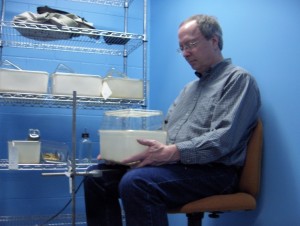 process:  skin ulceration and then tumor remission.  So his research made a lot of sense to me:  if a breast tumor was going to shrink naturally, it would follow this process.  After the talk, I invited him to continue his experiments at my lab in Terre Haute, Indiana.

In the Fall of 2005, my research technician, Dan Zhou, and I injected seven different groups of mice with tumor cells.  One day after the mice were injected, Bengston (photo) travelled to Terre Haute to do hands-on healing of the mice in the experimental group.  After three healing sessions with the mice, he travelled home to New York, and continued to give the mice healing at a distance.  One week later, we noted a few small tumors in the mice.  At two weeks, all but two of the mice had tumors.  The tumors were growing fast.   With this type of cancer, the mice die within six weeks.   But then, suddenly between two and four weeks, tumor remission began to occur.  The tumors started to shrink, and shrink fast.  By four weeks, only one-fourth of the mice had tumors.  We documented the tumor remission of several of these animals in detail (Moga and Zhou, 2008).  It was real.  Small tumors remitted completely, whereas animals with large tumors lived longer than expected.

Also at this time (2006), Dr. Zheng Cui and his research group at Wake Forest University reported that they had found and bred a strain of mice that was resistant to cancer.  When they injected lethal doses of tumor cells into this strain of mice, called Spontaneous Remission/Cancer Resistant mice (SR/CR), the mice survived with no ill-effect.  Wild type (WT) mice with identical injections quickly developed cancer and died.  Cui and colleagues have discovered that cancer resistance in mice is a genetic trait, an autosomal dominant, which is transferred to 30-40% of descendants.

How do SR/CR mice defend themselves from cancer?  What is unique about their immune system? Mice, like humans, have both innate immunity and adaptive immunity.  With adaptive immunity, immune cells are activated by exposure to a foreign cell or substance, triggering the development of memory T and B cells, and the production of antibodies.  With innate immunity, certain white blood cells, such as macrophages (MΦ), polymorphonuclear leukocytes (PMN) and natural killer cells (NK), attack invaders with no prior exposure – they recognize non-self molecules and immediately act.  The fact that SR/CR mice survived the tumor cell injections with no prior tumor exposure suggests that the anticancer response is based on innate immunity.

As further evidence in support of an innate immunity mechanism, Cui and colleagues have shown that:

Tumor remission in the Bengston experiments may also be based on an innate immunity mechanism.  Cui and colleagues believe that cancer resistance in mice is due to a mutation in a gene, which they are attempting to identify.   If so, then perhaps the Bengston healing method is turning on a gene or genes that are normally suppressed, except in the SR/CR mice?

So the fantastic results of the Bengston healing method – shrinking tumors in mice – may be explainable in terms of current cancer biology.  The missing link is how the healer affects the immune system of the mouse.