Healer touch sensations were the most frequently reported type of exceptional experience in a recent energy healer survey (Moga, 2017). Tactile sensations felt by the energy healers included:  warmth, tingling, vibrations and/or pulsations in their hands during healing sessions; sensing coolness or cold areas, heaviness or congestion, in the biofield of clients, and pressure sensations, pushing or pulling, to place or hold a hand position.  Previous studies have reported similar sensations (Moss, 1979; Cooperstein, 1992; Engebretson, 1996; Benor, 2001; Warber et al., 2004).  Investigators have wondered whether these perceptions may be based on actual physical fields.  In a study of healers among the Inupiat people of Alaska, Turner (1996) surmised that healer perception, “did not appear to be extrasensory perception, outside the senses, but an actual fine sense…in the fingers”.  A study by Maher et al. (1996) examined the tactile sensitivity of healers and patients in response to a vibratory stimulus, before and after healing, to determine if healers had enhanced tactile perception.  Contrary to what they expected, they found that healer touch sensations decreased following a healing interaction, while tactile sensitivity in the patients’ hands increased.  A recent study found that tactile sensitivity is affected by finger blood flow, with short-term reductions in blood flow leading to increased sensitivity (Jeong et al., 2008).  Many healers report a feeling of warmth in their hands, suggesting an increased blood flow in healer hands.  In support of this hypothesis, Baldwin and Schwartz (2012) observed increased fingertip blood perfusion in Reiki and Reconnection practitioners during self-practice.  These results suggest that, for healers, increased fingertip blood flow during healing is associated with decreased tactile sensitivity, so the source/underlying mechanism of healer tactile perceptions is, as yet, unclear. 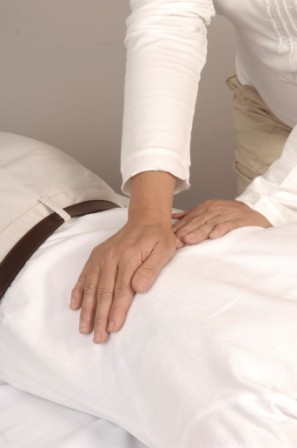 In addition to warmth in their hands, a significant number of healers also reported warmth in their heart area (3.23/3.49) during HT sessions (Moga, 2017). HT practitioners are taught to be “heart-centered”, that is, to focus on loving energies emanating from their heart (Hover-Kramer, 2009).  This mental focus on one particular body area may alter the sensations and physiological functioning of that area, as a form of biofeedback.  Biofeedback research has shown that a mental focus of increasing heat in one’s hands may significantly increase finger skin temperature (Taub, 1977; Freedman, 1991).  Similarly, a mental focus on moving energy through one’s hands and body may lead to a sensation of heat and tingling.  Healer touch sensations, such as warmth and tingling, are the primary means by which healers know that “energy is moving” (4.32/4.35).  So, hand warmth may be a useful indicator for student healers that something is happening.  However, warm hands in a healer are not always necessary for healing.  Janet Mentgen, founder of Healing Touch and an experienced healer, noted that healer “hands do what they need to do.  If the body needs cool, they will be cool” (Wardell, 2000).  Interestingly, “coolness” and detection of cool areas in the client’s biofield was reported less often by HT students than by HT practitioners (1.75/3.43) (Moga, 2017), which suggests that cool hands and coolness perception may require more healer experience than other perceptions (e.g., warmth, heaviness).

There may be different underlying mechanisms for the various tactile perceptions. For example, some healers reported feeling the client’s symptoms in their own body (2.45/2.64).  This type of experience has been reported in healer anecdotes and in qualitative studies (e.g., Cuddon, 1970; Cooperstein, 1992).  “Frequently I myself feel pain in the same place as the patient I am treating, although to a lesser degree” (Cuddon, 1970).  A possible mechanism for this experience may be electromagnetic induction (Slater, 2014) with the biofield of the client electromagnetically inducing changes in the biofield of the healer.  As one healer notes, you can, “use your [whole] body as a sensing mechanism” (Cooperstein, 1992).

A different tactile mechanism may be involved in healer perception of “effervescence” or “bubbles” while moving their hands through the client’s biofield; these sensations have not been reported in previous studies (Moga, 2017). The effervescence/bubbles may correspond to the “bright balls of plasma”, or small bursts of light, observed by clairvoyants along the edges of the body (Murphy, 1992).  Healer touch sensations of  effervescence may be a surface phenomenon with localized detection through nerve receptors in the healer’s hands.  Opsins, light-activated receptors that mediate photoreception, have recently been detected in human skin (Haltaufderhyde et al., 2015), posing the possibility that healers may be able to detect, at a subconscious level, biophoton emission from a client’s body.

Healer touch sensations may provide important clues as to the composition of the human biofield and its emissions. Unlike visual and auditory signals, the touch signal is not a well-defined quantity, with much still to be learned about tactile perception (Dargahi and Najarian, 2004).  An active area of research is the development of synthetic tactile sensors based on piezoelectric composites, with the goal of using such sensors in robotics and medical applications (Saccomandi et al., 2014).  By mimicking healer touch sensations, such sensors could be used to detect aspects of the biofield, such as pressure vibrations and ‘heaviness’, as currently sensed by healers.  In other words, the new synthetic sensors may be able to detect the human biofield, and provide a new measuring instrument for energy healing.

Cooperstein, M. A. (1992). The myths of healing: A summary of research into transpersonal healing experiences.  Journal of the American Society for Psychical Research, 86, 99-133.

Maher, M. C., Vartanian, I. A., Chernigovskaya, T., & Reinsel, R. (1996). Physiological concomitants of the laying-on of hands: Changes in healers’ and patients’ tactile sensitivity.  Journal of the American Society for Psychical Research, 90, 77-96.