The energy of Kundalini is so powerful, and the heat so intense, that some experiencers of Kundalini have commented on how close they came to death by “burning up”.  The famous guru, Gopi Krishna, notes that he had several close calls.  In line with this thinking, some authors have speculated that strange cases of Spontaneous Human Combustion (SHC) may represent Kundalini gone awry, that is, Kundalini in the unprepared individual may cause the body to go up in flames.

SHC may provide a clue to the energy of Kundalini and to energies attainable by the human body.  What is SHC?  The human body spontaneously incinerates to ash, with only a few body parts remaining.  Upon entering the room, people are shocked by how little of the body remains.  Here is a photo from Larry Arnold‘s well-researched book, Ablaze: 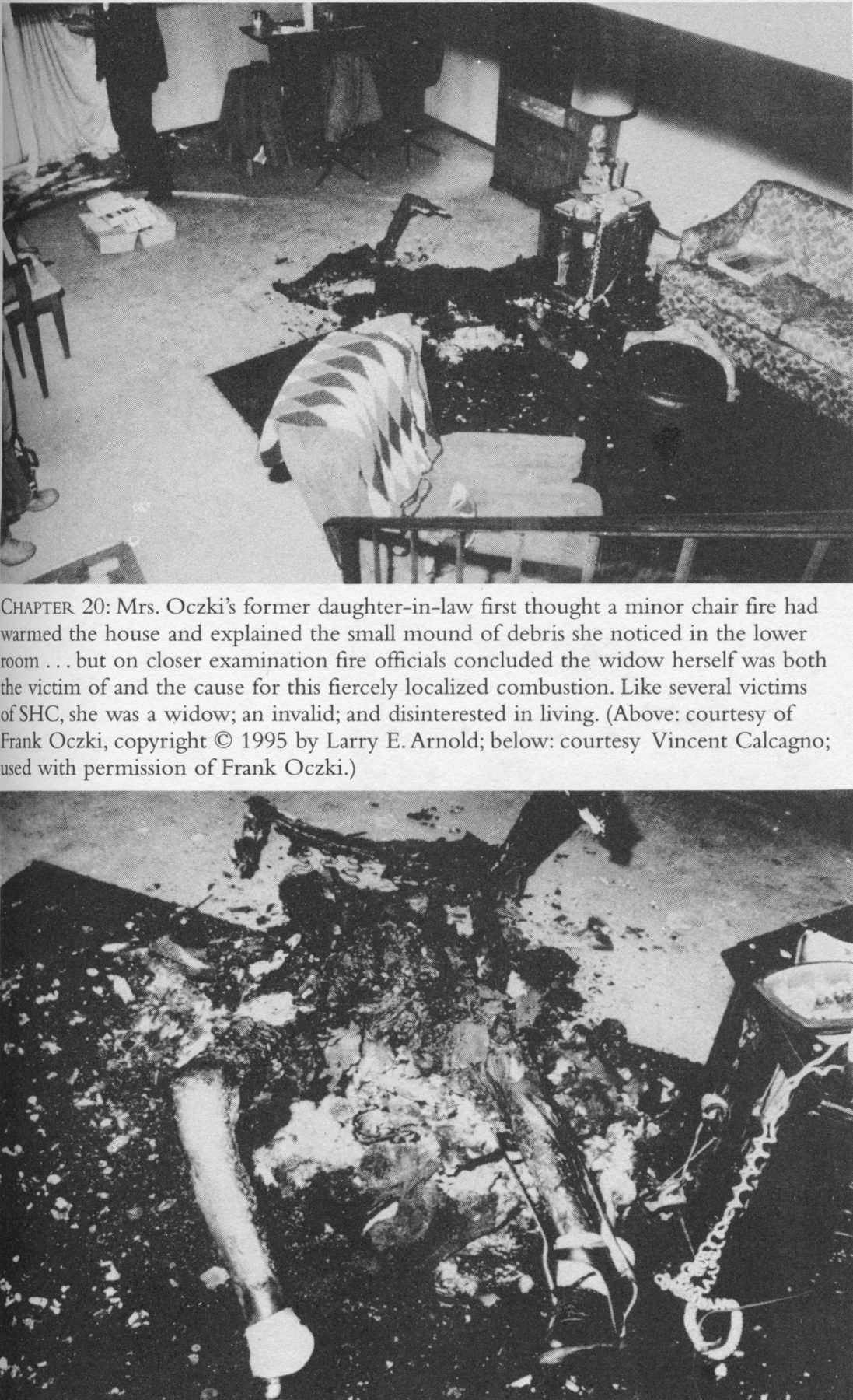 The heat involved is more than a typical house fire, where the torso and head remain largely intact.  The fire of an SHC resembles more a cremation, with the torso and sometimes the head, reduced to ashes, whereas the legs/feet and hands remain intact.  Most striking, with a SHC, nearby objects are largely unaffected, unlike a house fire.  The odor is different, with a sweet smell characteristic of SHC, whereas a house fire smells like a campfire with an acrid component.

Arnold describes people who have survived a partial SHC, where blue flames erupted from parts of their body, and the resulting burns resembled, “an electrical burn from a high-energy source”.

Penny Kelly has described Kundalini as an increase in electrical current in the body.  I speculate that the voltage potential of the body dramatically increases during Kundalini and SHC.  Older individuals, less physically fit, may be unable to endure such high voltage potentials and current flow, and that may be a causative factor in SHC.   But how can the human body, largely composed of water, erupt in intense flame?

Benford and Arnold (1997) did an important scientific study of an artifact from a purported SHC.  Similar to earlier SHC studies, they found that damage to readily combustible objects in the vicinity of the body was negligible, with the exception of hydrocarbon-rich objects such as food and plastics, which appeared cooked, melted or heat-distorted.  Examples were a fly-swatter paddle, plastic bread board, plastic wrap on a roll of paper towels and plastic television chassis.  Most puzzling was the melted butter dish and hot dogs in the refrigerator which appeared to have been boiled or microwaved.

Benford and Arnold did atomic and molecular analysis of a blackened book jacket located near to the deceased, and compared it to an identical book jacket (control sample).   Infrared (IR) absorbency analysis revealed evidence for a diol dehydration of the polymer plastic coating and cellulose layers that compose the book jacket, which could result from thermal radiation and/or acid catalysis.  With X-ray Photoelectron Spectroscopy (XPS) analysis, they found a significant decrease in oxygen content, consistent with dehydration. Carbon-14 (C14) analysis showed a significantly elevated C14 level in the exposed book jacket, similar to an “atom bomb effect”.

According to Benford and Arnold, “One theory that may account for all of the empirical data in the Mott [SHC] case is a biological-induced nuclear explosion”, where both neutron and proton radiation would be released.  Neutrons attracted to hydrogen atoms in the book jacket disrupt the CH2O  bonds, dehydrating the plastic/cellulose molecules, in effect, “carmelizing” the sugar molecules, producing a sweet or sugary odor.  Proton emission could account for the acid oxidation of the book jacket.

The energy of Kundalini and SHR thus may be subatomic in nature, and involve neutron/proton emission.  It is interesting that Low-energy nuclear reactions (LENR) are now a hot topic.   These neutron-based reactions can occur at room temperature, under macrophysical conditions (human body is macrophysical!), and involve electroweak interactions rather than strong-force reactions.

Going forward, it would be good to measure neutron and proton emissions from individuals experiencing Kundalini.  A variation of a Geiger counter is used to measure neutrons, where the gas used is boron trifluoride or helium-3 and a plastic moderator is used to slow the neutrons.  Because proton beams are used clinically for cancer treatment, some medical facilities have ultrafast silicon proton detectors.  Yes,it is a crazy idea – that the human body may be a source of LENR and the energy of Kundalini may involve neutrons and protons – but the next blog will look at a subatomic theory of energy healing.