At a “Physics of Healing Touch” workshop in St. Louis years ago, I was about 10-minutes late and the last person to arrive. There was only one seat/chair left available, which was located next to the HT instructor leading the class.  Sweaty and embarrassed, I sat down next to her.  The instructor, Victoria Slater, an RN/physicist and experienced healer, began by talking about how each healer emits their own unique sound frequency.  To demonstrate this, she held her fingers up to my ear (I was luckily sitting next to her!) in the Healing Touch hand position “Ultrasound”, and I could hear sound coming out of her fingertips!  It thrills me even now to recount this experience.  Here is a photo of Dr. Slater: 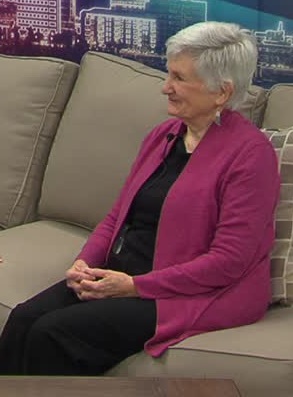 The sound from her fingertips was faint, and it seemed to be a single, continuous note. Her fingers were very close to my ear when she made the sound.  Among the people in the room, only I could hear it.  The sound had a peculiar quality, like the ultrasonic calls of a bat in flight.  Bat ultrasound is generally not thought to be audible to human ears, but I did hear a bat once.  It flew very close to my ear while trapped in the house.  The bat sound was also faint, but with a Doppler effect, like a small animal running along the wall towards me and then away.  Did I hear both of these sounds via bone conduction? Or perhaps, sounds at high frequencies are so dampened by air molecules that only sources which are very close to the ear can be heard?

It is curious that the founder of Healing Touch, Janet Mentgen RN, named this Healing Touch intervention, Ultrasound. Perhaps, she had some intuition that humans could or can produce high frequency sound during healing?

A few studies in China have found that Qigong healers can produce sound in the infrasonic range of 6 to 16Hz (Niu et al., 1998). The human body and our technological environment are relatively noisy at these low frequencies, so this is not an easy experiment.  To record infrasound, one needs a low-frequency microphone and a specially designed anechoic chamber, which blocks sound from exterior sources and absorbs sound reflections within the room.

Recently, I asked healers in my Healer Experience Survey (n=183) whether they could produce sound. A small percentage (14%) of the HT practitioners reported that they are able to produce sound through their fingertips during the HT intervention Ultrasound.  In a few experiments, I have tried to measure healer sound with an ultrasonic receiver, but have not found any local healers who can produce sound.  I suspect that only advanced healers may produce sound during healing.

In support of this hypothesis, psychologist-healers Carol DeSanto and Jim Kepner at Pathways for Healing describe the “sound energy” produced by gifted healers Rosalyn Bruyere and Bill Gray (deceased), which may be more effective than the typical “light energy” used by a majority of healers. For more information, check out their article on Bill Gray and the Origin of Nervous System Energy Work. I suspect that a subset of advanced healers may produce sound in their healing work, and so, it is important that we study this aspect of healing.