Years ago I had a series of Polarity Therapy treatments with a gifted healer who then moved to New Mexico.  He would balance the two sides of my body, and bring both sides into alignment, and I could feel the difference.   I searched for training in this biofield therapy and additional healers, but training and practitioners seem to be clustered in only a few places in the U.S.  Not a widespread practice.

The question of left-right polarity of the human body came up again for me recently when friends at the Swedish Society for Parapsychological Research introduced me to the scientific research of Göte Andersson (Andersson, 2015).  Andersson studied a 16-year old gifted clairvoyant, named Pontus.  Like many clairvoyants, Pontus described an aura of rainbow colors extending 50cm around the human body.  But, in addition, Pontus could “see” two inner fields, with the body’s right side as a red field, and the left side as blue, with a green energy flow down the middle of the body.  The red and blue energy fields were situated within the aura, and only extended 1.5-2.0cm above the skin.  Pontus perceived that these energy fields moved in two separate circles.  In his research, Andersson tested whether a magnet positioned near the body could affect these inner fields.  Pontus observed that when the North pole of the magnet was moved towards the blue field (left side), there was an attracting effect, whereas the South pole caused a repelling effect, with a reverse effect on the other side.  These experiments and observations suggest a left-right polarity of the human body, similar to a magnet.  Here is a drawing of the left-right polarity of the human body as observed by Pontus: 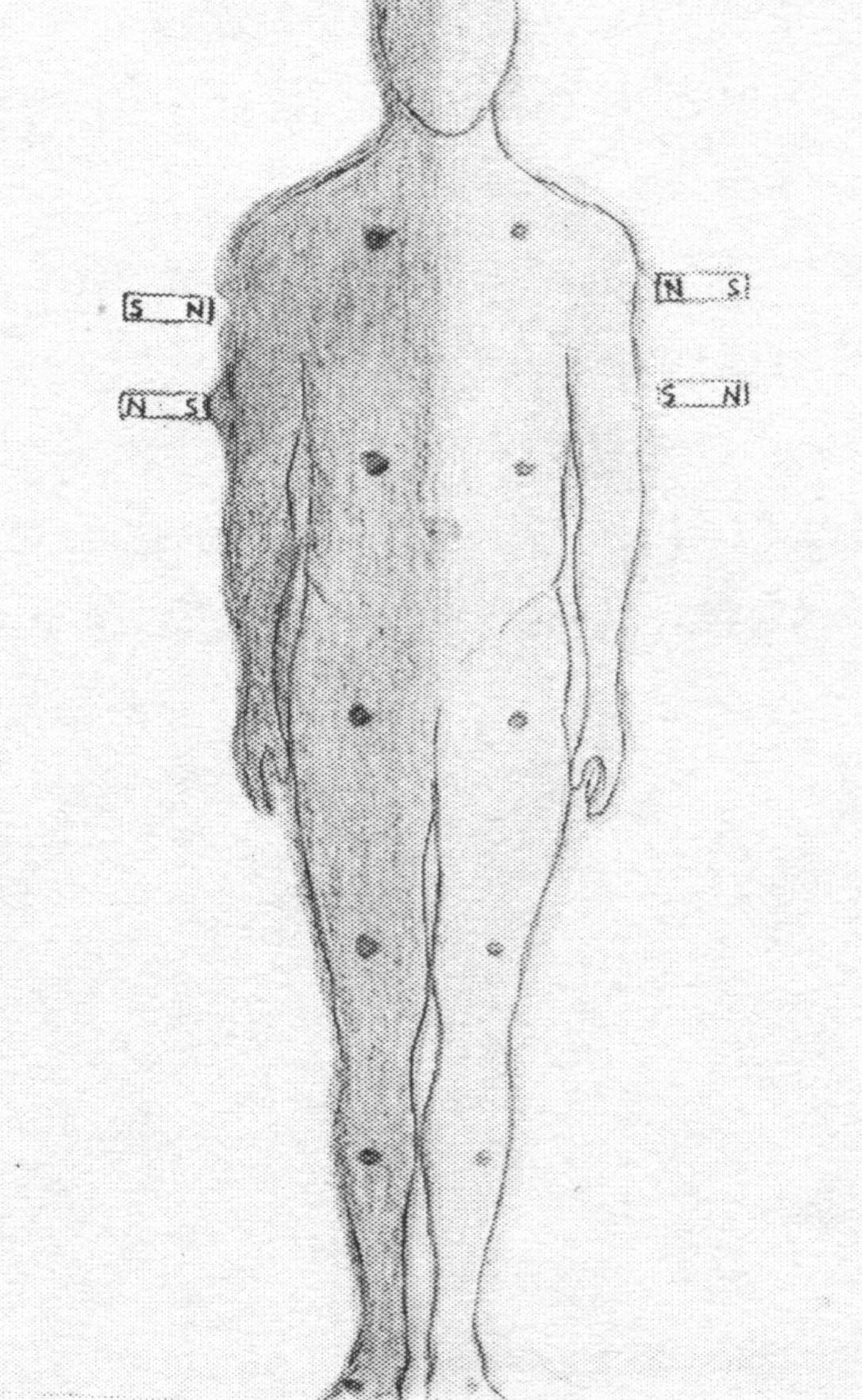 The Pontus vision closely corresponds to an earlier description by Randolph Stone, D.C., founder of Polarity Therapy.  Stone observed energy currents rotating in opposite direction on each side of the body, with a positive charge on the anterior right side of the body, and a negative charge on the left.  The posterior, back of the body displayed a reverse charge.  Stone also described a midline energy current, but he visualized this current as white and ultrasonic, rather than green, as in the case with Pontus.  Here is one of his figures showing the rotating fields with opposite polarity: 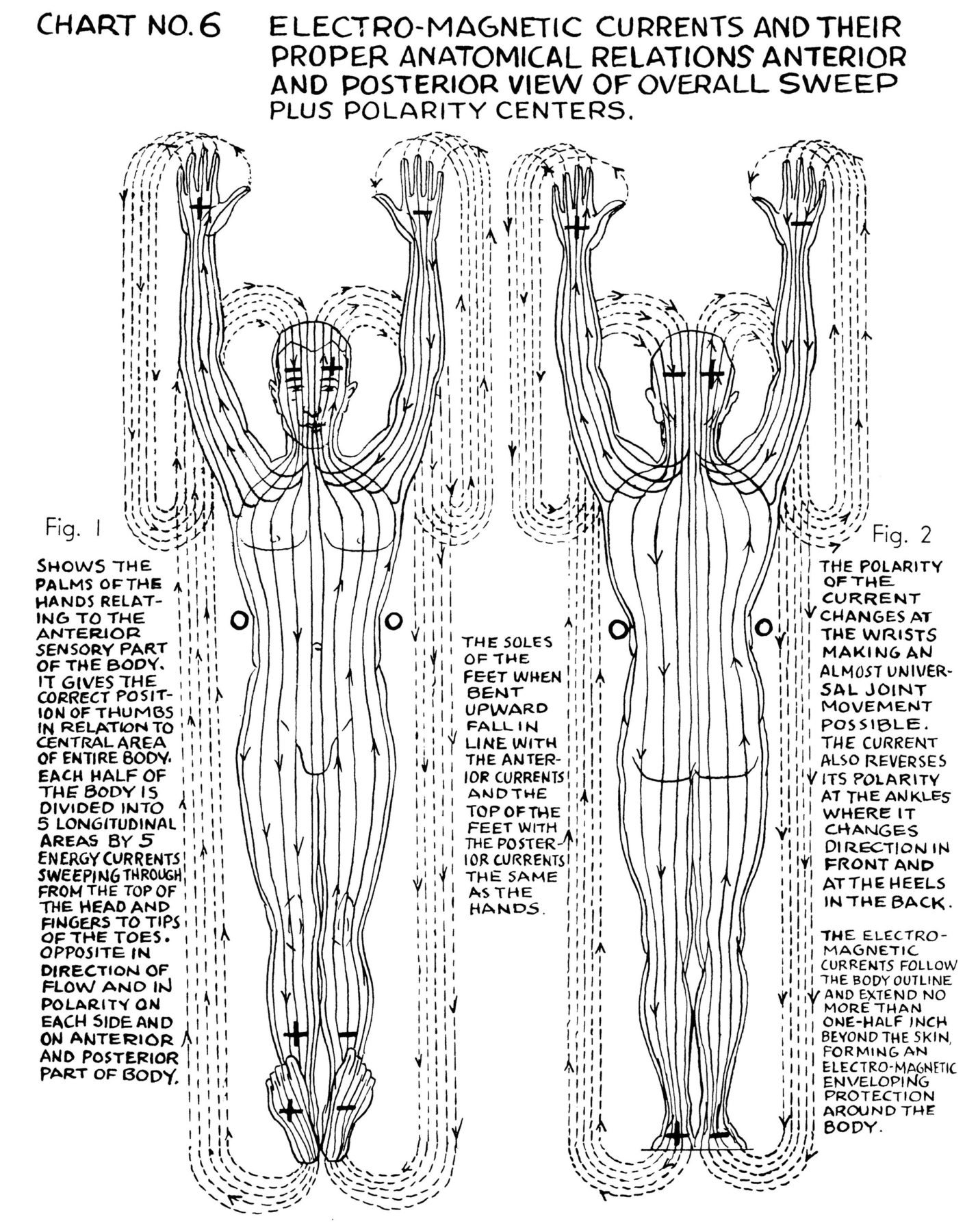 Left-right polarity of the human body was also observed by Baron Karl von Reichenbach who did a number of experiments with ‘sensitives’, individuals who could detect magnetic passes, i.e., the movement of a magnet in close proximity to their body.  In his research, he found that the left and right hands are polar opposites, analogous to the magnetic.  The left hand was the negative pole, and the right hand, positive.  Similar to Andersson’s research, he observed different effects with the North-South poles of magnets, depending on the side of the body tested.

L. E. Eeman had the brilliant insight to connect the negative and positive poles of the human body in a circuit, self-balancing one’s own energy.

I was intrigued by the image of two rotating fields, on the two sides of the body, so I did an internet search and found:

It is interesting that some healers can feel a whole-body pulsation, which may correspond to “a stationary pulsating magnetic field”.   Vicki Slater RN PhD has theorized that energy healing involves electromagnetic induction.  Is the human body like an induction motor?

The clairvoyant visions of Pontus and Randolph Stone, namely, the energy of the two sides of the body rotating in opposite directions, may be an important clue as to how the body, and energy healing, operates.

Andersson, G. (2015) The psi-track and other unexplained energy fields.  In (I. Fredricksson, Ed.): The Mysteries of Consciousness: Essays of Spacetime, Evolution and Well-Being.  Jefferson, NC: McFarland  & Company, Inc.

Stone, R. (1953) The Wireless Anatomy of Man and its Function. Published by Dr. Randolph Stone.