I have often wondered if the magnetic field activity I am measuring during energy healing is “orgone”. So, the next few blogs will be on the topic of orgone and Reich’s charge/discharge hypothesis as it applies to energy healing, sex and other bioenergetic activities.

In the 1930s and 40s, Wilhelm Reich, MD, psychiatrist and psychotherapist, studied “life energy”, which he termed “orgone” (Raknes, 2004). His early work began with psychotherapy, where he observed “character armoring”, tension, anxiety and neuroses in his patients, noting that these conditions often occur in patients who lack a satisfactory sex life.  This led to his studies of human sexuality and sexual orgasm, where he developed a formula of biological tension and charge.  According to Reich, sexual orgasm involves the following steps:  mechanical tension → bioelectric charge→ bioelectric discharge → relaxation.  Reich described three functions for human sexuality:  1) procreation (propagation of the species), 2) a feeling of well-being and pleasure, and 3) the regulation of bio-energy.  From his book, The Function of the Orgasm: 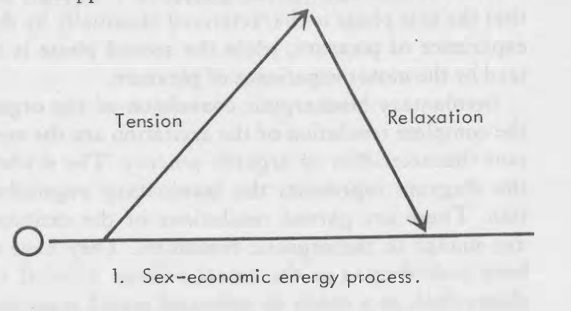 Reich’s charge/discharge hypothesis was largely based on clinical observation, although he did later examine the bioelectric potentials of human skin under varying conditions using rather crude measurements by today’s standards (Reich, 1982).  Reich’s formula of biological tension and charge, and his idea that sexual orgasm is an energetic release mechanism, ensuring optimal emotional and physical health, are testable hypotheses and could be studied with current scientific instrumentation.

Although no one has tested Reich’s charge/discharge hypothesis with physiological methods, a number of healers have focused on the energetic aspects of sex. For example, the energy healer William Gray emphasized the importance of marrying a partner with “compatible energy”.   “Blending is created through the sex relationship…[of] properly mated wave energies…is nature’s method of keeping the magnetic field vital”.   “When the wave energies are not properly blended”, there is no “fueling” of the magnetic fields, eventually leading to physical weakening and illness in one or both partners.  Reich (1982) also observed that “sexual compatibility exists between certain men and women…a remarkable phenomenon…completely unexplained.”

Kelly (2005) found that sexual experience is a “health maintenance mechanism designed to refresh the entire field of energy”, and its primary function is “to regenerate the wave matrix that maintains the physical form”. She writes that, “during full sexual orgasm, there is a dissipation of heightened electro-magnetic charge”.  But also during “mini-corrections”, without full arousal and release, there are “body discharges in a brief series of very low amplitude waves”.

Likewise Anodea Judith, trained in Core Energetics, notes that, “orgasm plays a huge role in the regulation of charge, through allowing discharge of energy, not only from sexual arousal but from the tensions of everyday life and emotions in general.”

Reich’s charge/discharge hypothesis is applicable to energy healing. In the Copper Wall Experiments, Dr. Elmer Green and colleagues recorded electrical voltage surges in the body-potential of healers during healing, which then was quickly transferred as surges in adjacent copper walls.  They hypothesized that energy healing involves an increase of charge in a healer’s body, followed by an emission of charge, detectable in the local environment.  I have observed changes in magnetic field (MF) activity during energy healing sessions, which resemble a charge-buildup and release process (Moga, 2014).  Healers can ‘feel’ releases and discharges during energy healing sessions.

My working hypothesis: Energy healing is “orgone”, and like orgone, involves a charge/discharge process.  Charge/discharge is a holistic principle of physiology, affecting the organism as a whole, and as such, may be considered ‘metaphysiology’.  Energy healing, sexual orgasm and other bioenergetic activities are all part of a one energetic spectrum of the human body.  I will continue further exploration of this idea in future blogs.

Reich W (1973) The Function of the Orgasm: Sex-Economic Problems of Biological Energy (The Discovery of the Orgone, Vol. 1).  New York, NY: Farrar, Straus and Giroux.