Could our civilization be at the end of a long epoch?  Cultures around the world describe long galactic cycles of time where civilizations rise and fall.

For example, Native American Hopi mythology describes a series of  “Worlds”, with cataclysms ending each World.  According to the Hopi, we are currently in the Fourth World.  The Third World ended with a great flood.  The Fifth World is predicted to be an age of peace.

In India, the Yuga cycle in Hindu cosmology consists of 4 repeating yugas or epochs of time.  Swami Sri Yukteswar Giri (1855 – 1936), in the introduction of his book, The Holy Science (1894), proposed a Yuga Cycle of 24,000 years.  We are currently in the last epoch of a Yuga cycle, namely the Kali Yuga, with a cataclysm predicted to occur at the end, birthing a new age.

In our modern society, we usually ignore past civilizations and long epochs of time.  But in the 17th and 18th centuries, some Western thinkers, such as  Isaac Newton, Thomas Burnet, and later William Blake, viewed the cosmos as going through successive, long cycles. The destroyed Earth of one cycle would serve as the skeleton to develop later into a new Earth.

In Earth Under Fire, Paul LaViolette weaves together evidence from geology, astronomy and world mythology, showing that these world cosmologies could be describing actual geological and astronomical events, with cataclysms or extinctions occurring at the end of each ‘age’. 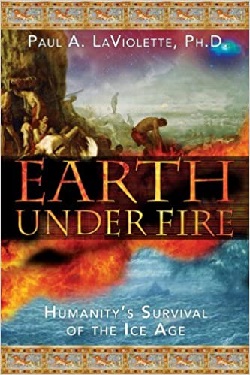 Years ago, I had a dream of Fire in the Sky, a major calamitous event.  The cover of LaViolette’s book shows a fiery sky similar to what I saw in my dream.  While reading Earth Under Fire, I felt an inexplicable sadness, a strong premonition, that such an extinction event could occur again.

In the book, On the Tip Edge of a Miracle, Navajo silversmith and healer, Dennison Tsosie receives the following channelled information, titled Rebirth of the Stars:

“They were telling me about an energy wave that causes the rebirth of the stars.  It re-energizes the universe and it comes every so many thousands of years.  They said it is about to happen again.  This energy is electromagnetic and it comes in four waves.  There will be a space of time between each wave.  There will be like a shock wave, without any warning.  The last wave will be the strongest.”

“There are a lot of particles of matter, like dust particles, that come with the last wave, and the sun interacts with the particles in some way, maybe like a solar flare or something on that order, that’s why it’s the strongest wave.  It is like the afterbirth.”

“In times past it was called ‘the Dragon’s Breath’ because that’s what it will be like.  It will also cause huge electrical storms and wipe out anything electric.  It will cause searing heat and even forests will burn.  It will cause earthquakes and tidal waves and then there will be extreme cold.”

The Tsosie prophecy closely resembles the series of events predicted by  Paul LaViolette in Earth Under Fire.  LaViolette theorizes that Superwaves, explosions from the core of our Galaxy, reach us periodically, and one or more of these may have triggered the last great extinction of mammals. According to LaViolette, the first sign of a galactic core explosion will be the sudden appearance of synchroton radiation in the form of a bright blue star.  Hopi prophecy describes a Blue Star Kachina, a blue light in the sky, heralding the end of the Fourth World.

Following the blue light and unusual sky effects, the Superwave will arrive as an electromagnetic pulse, similar to a high-altitude nuclear explosion.  Next, a powerful gravity wave will hit the planet, and with its ensuing crustal torque, will trigger earthquakes and volcanic eruptions.  Repeated cosmic wave volleys as part of the Superwave will push interstellar dust and debris into the solar system, triggering solar flares.  A direct hit by a solar flare, a coronal mass ejection, can literally sear the planet, creating fires on the surface.  LaViolette provides evidence of a layer of soot worldwide after the last great extinction, suggesting a solar conflagration.  After a powerful Superwave or series of Superwaves, the solar system may be shrouded in dust, with a red darkened sky on Earth, triggering an ice age.

Despite this gloomy scenario, world cosmology/religion tells us that long galactic cycles and periodic rebirth of the stars is a normal occurrence, a cosmic breath, on a grand scale.