While recording magnetic field activity during a Tai Chi class, a student sat down next to one of my magnetometers, and proceeded to give a BIG yawn, a full-body yawn, stretching arms and legs.  A magnetic field wave suddenly appeared on the computer screen, similar to the waves I see during energy healing (Moga and Bengston, 2010).

I realized at that moment that energetic releases, whether during healing or yawning, naturally produce magnetic field waves. Both types of releases involve a deep inspiration followed by a slow expiration.  This visible change in respiration is how healers typically know that their client has had a ‘release’.  Yawning may be a magnetic field discharge.

Yawns can be contagious, with the yawning of one individual triggering the yawn of another.  The contagion of yawning is generally attributed to a neurobehavioral effect, with sensory stimulation of the cerebral cortex leading to activation of brainstem areas involved in yawning (Askenasy, 2001).

My research suggests that a field effect, involving magnetic field waves, may also underlie contagious yawning.  A magnetic field wave released by a yawning individual may impinge on the biofield (i.e., electromagnetic field of the body) of another individual, triggering a buildup and energetic release, a yawn in other words, by the second individual.  Yawning may involve a “field phenomenon”, with interactions between two human biofields.

As possible evidence in favor of this hypothesis, Sandyk (1998, 1999) has observed uncontrollable yawning and stretching in neurological patients treated with AC pulsed electromagnetic fields of picotesla flux density.  He speculates that the combination of abnormal brain chemicals and specific electromagnetic field parameters may lead to yawning and stretching behavior in some patients.  A “window effect”, widely studied in bioelectromagnetics, may be involved in yawning, where specific magnetic field frequencies and field strength may trigger the behavior, but other magnetic fields, with different frequencies and strength, may not.

Not all yawning is contagious, however, as researchers have found with infants yawning.  Yawning may be a magnetic field discharge, following charge build-up, due to tension or lack of physical movement.  These magnetic field waves may be life-enhancing, furthering growth, thus it would make sense for infants and young animals to yawn more than older individuals. 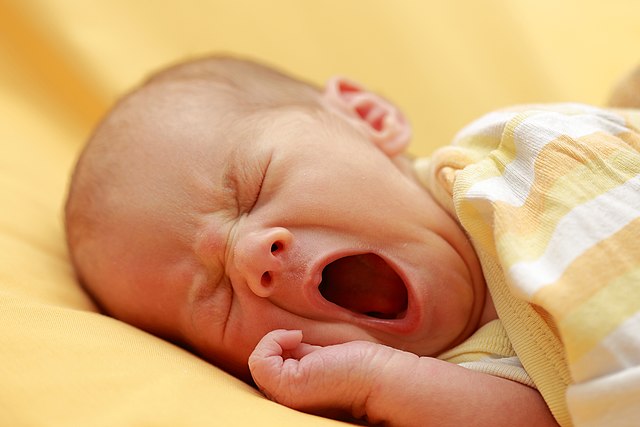