Years ago, I picked up an old, used book by science writer D. S. Halacy (1966) titled, “Radiation, Magnetism, and Living Things”.  This book has many still-relevant observations regarding biomagnetism and the radiations of living things.  I was particularly intrigued by his description of the research findings of Stefan Manczarski, a Polish scientist and engineer.  Halacy states that:

“…Prof. Stefan Manczarski, maintained in his book, The Problem of Thought Transference in the Light of Radio-Technical Investigations, published in England in 1945, that human beings do send out radio waves, and he performed many experiments before arriving at this conclusion.  He even assigned a specific group of wavelengths that he felt convey thoughts over distances.”

I searched for this book for years!  With the help of Dr. John Reed, I found out that the book had never been published – most probably due to post-war conditions in Poland.  Manczarski himself states that his scientific data and equipment were largely destroyed during the Warsaw uprising in WWII.  After the war, Manczarski published a summary of his findings on the radio waves associated with telepathy in a 6-article magazine series in Poland.  The National Library of Poland kindly sent me a copy of these articles via interlibrary loan.  And I was able to get portions of these articles translated into English.  Here is a photo of Prof. Manczarski: 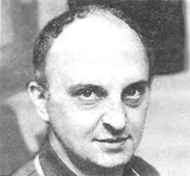 Why is his work important?  Certain aspects of the human biofield are known, such as: the human body can emit biophotons, can create electrostatic charge, and can emit a measurable magnetic field, but evidence is scant regarding the radiofrequency range, so I was curious what evidence Professor Manczarski had found.

According to these articles, Manczarski did “tens of thousands” of simple telepathy experiments using a Polish version of Zener cards, the cards used in ESP experiments by American parapsychologist J.B. Rhine, which were designed by Karl Zener in the 1930s (for an overview of the Rhine research, click here).  In this test for telepathy (ESP), the experimenter picks up a card in a shuffled pack, observes the symbol, and records the answer of the person being tested, who guesses which of the four or five designs is on the card. The experimenter continues until all the cards in the pack are tested.

Rhine’s early Zener card experiments have been largely discredited due to sensory leakage, i.e., clues inadvertently given to the subject, such as differences in body language of the experimenter during the tests or creases in the cards, which helped the subject guess the design on the cards.  These clues produced very large positive hit rates.  Later carefully controlled experiments produced low hit rates, which relied on statistical analysis for significance.  In line with these modern results, Manczarski also had low hit rates, which relied on statistics for significance.  A good sign!

As a radio engineer, biophysicist and geophysicist, Manczarski theorized that the phenomenon of telepathy is based on the transmission of energy in the form of electromagnetic waves.  So, he was not just trying to prove that ESP exists, he was interested in electromagnetic radiations of the human body possibly associated with this phenomenon.

His mathematical and engineering background are evident in the series of experiments he did to characterize the radio waves associated with telepathy.  Here are some of his experimental findings:

Parapsychologists would dispute Manczarski’s finding of an optimal telepathy range, based on experimental studies of long-range ESP, telepathy and remote viewing, suggesting a nonlocal, distance independent psi mechanism (e.g., Rhine and Pratt, 1940; Stokes, 1987; Sheldrake, 2014).  On the other hand, my studies with healers and energy healing suggest a dual mechanism for psi phenomena, involving both classical electromagnetic fields and non-classical fields (e.g., extra-dimensions or de Broglie waves), which I will talk about in another blog.  So the optimal telepathy range described by Manczarski may be a local electromagnetic component associated with the nonlocal, extra-dimensional component of telepathy.

In regards to the blocking with metal screens, similar results were found by Harvalik (1970) who determined that metal screens in the head and kidney regions prevented dowsers from detecting an exogenous electromagnetic field.  Dowsing is a psi phenomenon, like ESP.  It is the detection of hidden objects and information, and may involve radiations or fields emanating from objects or living things.

Metal mirrors is an interesting intervention.  It may be possible to enhance the effects of energy healing or other psi abilities with metal mirrors.

The Ruhmkorff inductor created EMF “noise” that disrupted the telepathic signal.  Similarly, ESP is negatively affected by disturbances in the geomagnetic field, particularly the 0.025-0.1Hz band of pulsations (Ryan, 2008).

The human body emits infrared radiation (and even some radio waves) because it is warm.  Healers generally have ‘warm hands’ while working with a client.  Connor et al. (2020) noted that healers could alter the reading of RF (radiofrequency) meters, but these investigators did not describe the frequency spectrum or power of the RF emissions.  So a big unknown is the radiofrequency emission spectrum of the human body, and how it changes under different circumstances, using modern radio receivers.