In John Wyndham’s novel, The Chrysalids (also published under the title Re-Birth), a nuclear war has destroyed the earth.  Humans survive in small groups under primitive conditions, with a fundamentalist religion warning of “deviations” – any physical mutation, no matter how small, which have become abundant due to the background radioactivity, must be destroyed or cast out.  The protagonist, David, discovers that he has a hidden mutation, the ability to create thought-shapes and communicate them telepathically to others with the same mutation.  The thought-shape makers are in danger, and flee the fundamentalists into the barren ravaged land, where they telepathically contact a community of people who can “think-together”.  This new breed rescues them to help create a New Earth, based on a developing human ability to group-think.

Wyndham writes that the “Old People” who detonated the nuclear bombs, “were only ingenious half-humans, little better than savages; all living shut off from one another, with only clumsy words to link them…they had no means of consensus…they created vast problems…there was, you see, no real communication, no understanding between them.”  For me, this feels like the world we live in now. Wyndham’s solution to global peace is for humanity to learn to develop “think-together” and group-think, i.e., telepathy.

The Chrysalids may already be here.  Of the almost 8 billion humans currently on planet Earth, there may be a significant percentage who have the psychic ability to create thoughtforms, mental imagery, and communicate with others via “think-together”.  A recent article in Smithsonian Magazine suggests that telepathy may be in the “realm of the possible”: 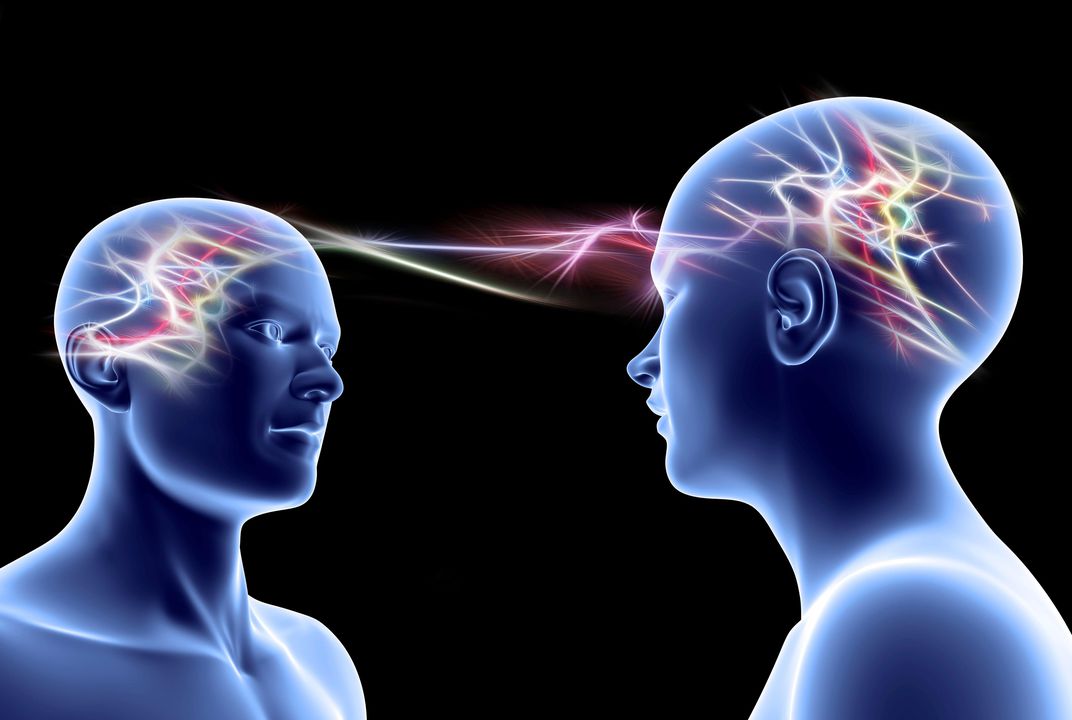 Training may be what is needed.  Energy healing, dowsing, and remote viewing are recognized as ‘trainable’, and there are organizations/teachers who train interested individuals in these arguably psychic abilities.  As another example, The Monroe Institute, founded by Robert Monroe, was created to research and train people in attaining an Out of Body Experience (OBE).  In his books, Monroe describes “Rotes”, thought-balls, a form of nonverbal communication (NVC) between intelligent beings (“Inspecs”) which he experienced in OBE journeys.  Rotes are an example of what is possible telepathically between humans.  One of the Rotes which Monroe received (“The Gathering”) showed him, “a very rare event—the conflux of several different and intense energy fields arriving at the same point in your time-space…[which will] offer human consciousness a rare potential to emerge rapidly into a unified intelligent energy system”.  In other words, a time may be coming when we can develop think-together and group-think very rapidly.

Thoughtforms, mental imagery, are part of many cultural traditions (Noll, 1985), so there is a precedent for this. Richard Noll focuses on the cultural practice of shamanism where visualization and imagery are essential to the shamanic journey and shamanic practice.  Messages and communications in terms of imagery are received by the shaman from various spirits, which is a form of “think-together” between human and non-human beings.  Michael Harner notes (in his response to Noll, 1985) that 9 out of 10 individuals who receive training in shamanism are able to develop the visualization abilities needed for this type of nonverbal communication.

Other traditions where mental imagery cultivation occurs include:

A Chrysalid is a pupae of a butterfly, in the process of transformation.  Unseen to us, humankind may be in a chrysalis stage, preparing for a future as more highly evolved humans.  At this point, it would be good to develop our psychic abilities and become the Chrysalids.