I recently returned from the annual conference of the Society for Scientific Exploration.  Members study “anomalies”, including energy healing, UFOs, parapsychology, remote viewing, etc. – which the scientific mainstream is still reluctant to address.  It is an open-minded, educated group of people.  At this meeting, I was struck by the urgency felt by so many speakers and participants – that our time requires change, that we are on the precipice of calamity – environmental, primarily – that we need to work together to solve the most pressing problems of today, like new sources of energy, protecting the oceans, etc.  In that spirit, I feel the need to expand this blog beyond energy healing.  Here are some thoughts on the importance of trees (yes, trees!) and our future return to the forest:

In The Key, author Whitley Streiber describes his encounter with an enigmatic character in a hotel room in 1998.  The character, named Michael, outlines the future of mankind, “to ascend or go extinct”.  He states that, “The next ice age will begin soon”, leading to a massive reduction in the human population.

Whitley probes and argues with him. One of the most haunting exchanges for me:

Whitley: How can we [humans] change?

Whitley: How do we surrender to God?

Michael: Return to the forest.  Otherwise, you will destroy the earth and yourselves.

Speed forward to now, 2019. Recently, I asked inwardly the meaning of the Notre Dame cathedral fire, which destroyed the roof of this magnificent church.

A powerful image came to me – a Council of Trees. They stood before me – tall, mature evergreen trees with strong essence.  I felt great alarm.  It was an environmental message.  They said to me, “plant one thousand trees”. Not rebuild the cathedral.  No, the message was to plant trees.

We pretty much ignore trees in our daily life. To catch our attention, they burn, as in the Notre Dame fire, and still we do not notice.  The roof of Notre Dame was supported by massive timbers from 300- to 400-year old trees.  Indeed, the attic in Notre Dame was called “La Forêt”, based on the entire forest that was cut down to build it.  Recent news articles state that such large trees do not exist in France anymore, so the roof cannot be rebuilt as it was. 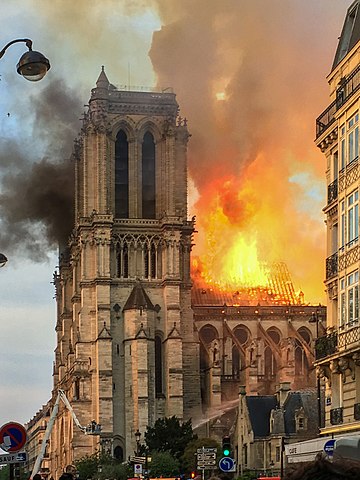 So how many trees have been lost during our modern time? Scientists estimate that almost ½ of the original forest on planet Earth has been cut.

Why do we need more trees? A recent article in Nature Conservancy magazine highlights efforts to plant more trees in New York City, “to help tackle climate change”.  The city is seeing more intense heat waves and frequent storms.  City trees “cool the air and help absorb the torrents of rain”. Trees also absorb carbon and pollutants from the atmosphere.

In the channeled work, The Robes by Penny Kelly:  “Trees and vegetation are critical elements in moderating and controlling electromagnetic fields [along the surface], and therefore the wind.”  The absence of trees in the Arctic and over the ocean is why wind speeds can reach 100mph and more in these areas.  Reducing wind speed is one benefit of trees and forests.  Also, trees can “shift their electromagnetic signature” so as to attract moisture through rainfall.  Dry, ‘thirsty’ trees attract more rain.  The deciduous forest in the Northeast U.S. receives more rainfall annually than the grassy Central U.S.

Scientists have found that trees also evaporate large quantities of water, creating rain clouds downwind.  So strategically planting trees in one area can reduce drought in another area.

Will we rise to this challenge? Not searching for God in old religions and beautiful old churches, but finding God in the Forest, in harmony with Nature.