After doing a series of control experiments with clients listening to a progressive relaxation CD with no healers present, I wondered what the MF activity would look like with the reverse – with just healers present in the room and no clients.  There are no published studies with this type of control, which I call “mock HT”, with the HT practitioner mimicking the movements of a typical HT session.

Having been trained in Healing Touch, I thought that I would test this control first, before asking healers to do it.  So I did a series of 10 mock HT sessions in a clinical exam room, similar to the room healers would be using.  In the first session, I felt uneasy practicing HT interventions/techniques over an empty massage table – behind a closed door in a busy medical clinic.  More problematic, I moved through the techniques too quickly without a client, finishing the mock HT session within 30 minutes, when I needed to do 50 minutes – the length of an average HT session.  After a couple sessions of this, I thought I would try using an imaginary illness during the mock HT session – to help me stay engaged and slow me down.  For readers unfamiliar with HT – all HT sessions begin with an energy assessment where the healer uses a pendulum to check the openness of each major and minor chakra.  To my surprise, when I did an energy assessment with the imaginary illness, I detected an energy pattern/imbalance reflecting the particular illness.  Different imaginary illnesses had different energy patterns, as discerned with my pendulum.

Working with an imaginary illness during the mock HT slowed me down so that the session more closely resembled an HT session.  But I was puzzled by the MF activity during mock Healing Touch.  The MF activity seemed to reflect my emotional and mental state, which is why I continued until I had completed 10 of these sessions. 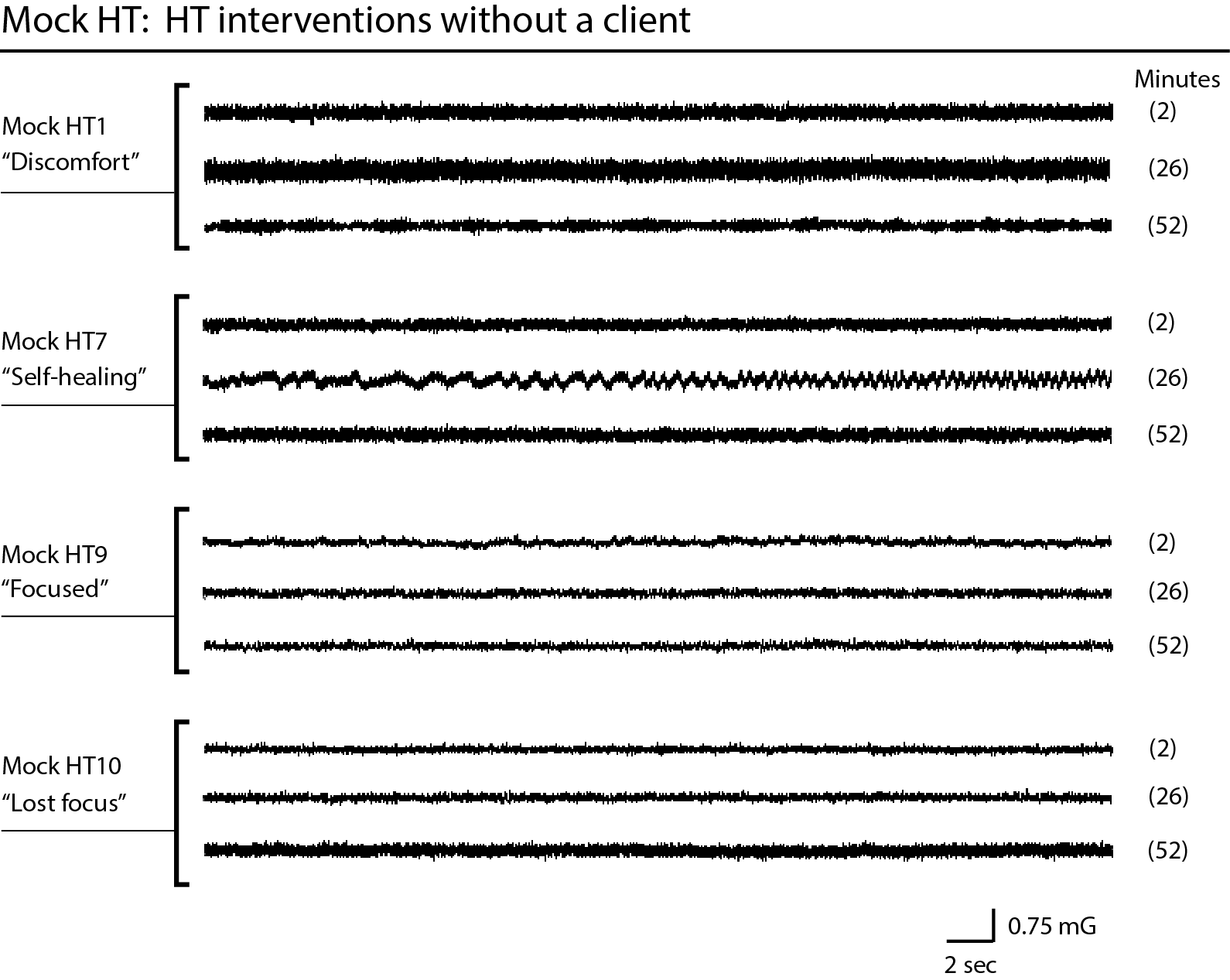 In the first session, HT1 in the figure above, I felt discomfort doing the mock HT session.  The magnetic field activity in this and the first 6 sessions was similarly messy with a noisy background.  During the seventh session, HT7, I was feeling physically ill, but decided to do the session anyway.  I used my symptoms as the imaginary illness.  During this session, I observed MF oscillations (26 minutes in HT7) similar to those I had seen in HT sessions, and I felt much better after the session!  The mock HT of my own symptoms had produced self-healing.  This was a breakthrough for me.  By the ninth session, HT9, I was able to enter the “healer space”.

During HT9, I felt a warm feeling in my heart chakra.  I was calm, centered and focused with loving energy.  The MF activity became very quiet with no oscillations.  I had witnessed this before in HT sessions, but had not understood it.  In the tenth session, HT10, which occurred right after HT9, I was similarly focused, but towards the end of the session, I lost focus and began to think of what I needed to do later after the session.  The increase in background noise (52 minutes in HT10) in the MF recording reflected this loss of focus.

The MF activity during mock HT session with Healer Q started out as noisy, but then quieted down, which is what I expected given her experience as a HT instructor.  What surprised me was the HT session with Healer Q.  As soon as the door closed for the HT session, while she was talking with the client, the MF activity immediately began to rise, leading to MF oscillations typical of a HT session.  I was impressed with her ability to quiet the ‘energy’ in a room, and then move it, as needed, for her client. 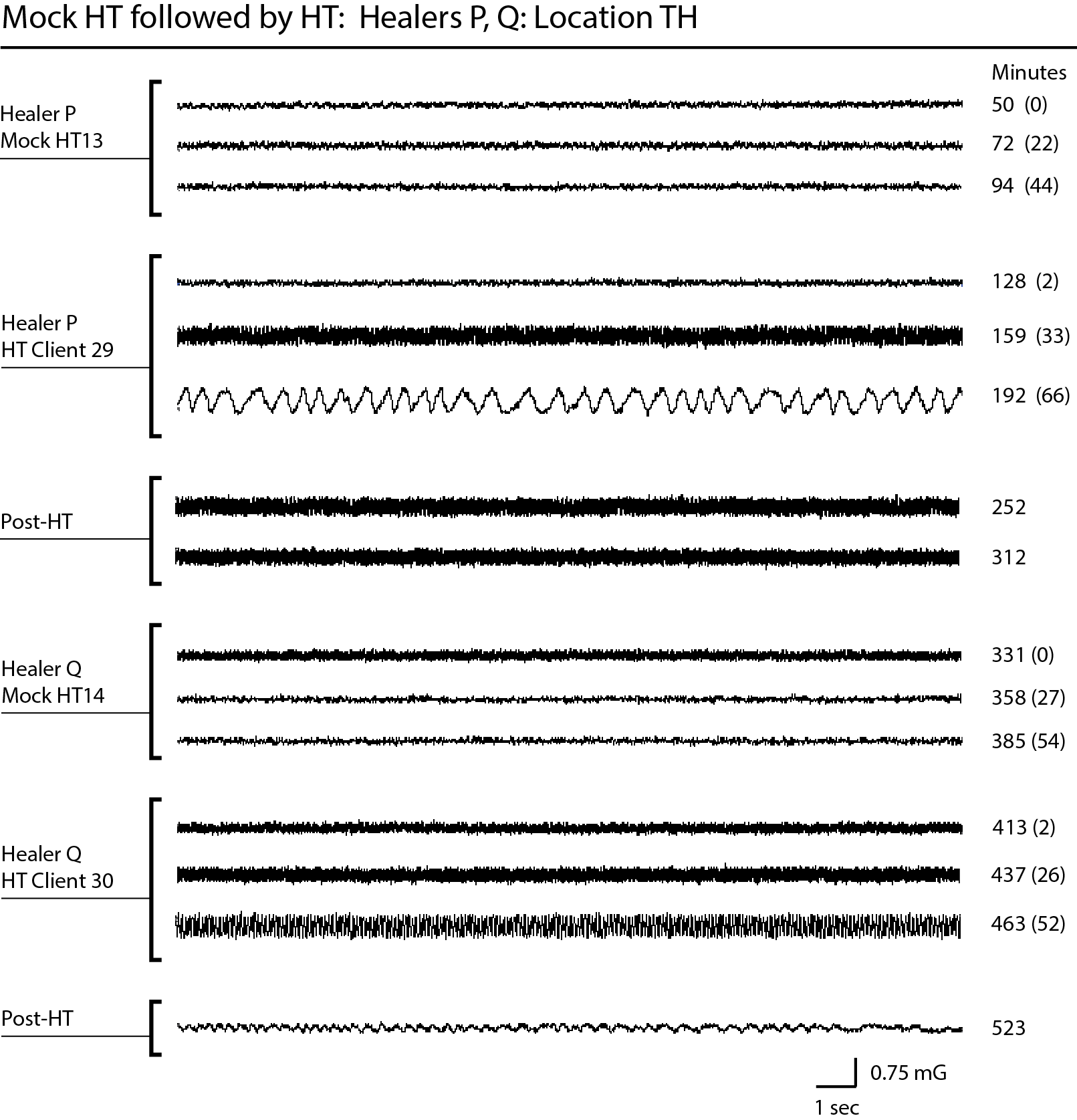 Recording MF activity during mock Healing Touch sessions established that the physical movement of a healer does not trigger MF oscillations.  And more importantly, these experiments showed that healers have the ability to quiet the energy in a room.