A German dowser, named Kathe Bachler, discovered that underground streams of water and subtle earth radiations can be a source of geopathic stress negatively affecting children at school and their health.  For example, she tells the story of a young boy, Manfred, who suffered from severe asthma, which was not responding well to medication.  Manfred’s father, hearing about the possible negative influences of the earth on health, moved his son’s bed to another corner of the room.  Manfred’s health dramatically improved, with no further asthma attacks.  Bachler examined the room and discovered an underground water current and a Curry-crossing – sources of geopathic stress – where the bed had previously been located.  She documented many similar stories with her large research project, “Research into the connections between geopathic zones of disturbances and the academic failures in school children”, studying the houses and apartments and school performance of 3000 school-age children.  She found that the position of the bed was important, but also the place for homework and the desk in school – each of these areas needed to be free from geopathic stress in order for the child to thrive and do well in school. Later, working with physicians, she confirmed earlier work that found a high incidence of cancer in patients whose beds lay within a geopathic zone of disturbance, and also, that geopathic stress can contribute to a wide variety of health issues.

Although I am a long-time dowser, I never imagined that I would find a geopathic zone of disturbance in my own living space.  Shortly after moving into an old Victorian house, I asked my sister for help in moving my bed from one wall to another.  I could not sleep, and felt physically uncomfortable in the bed, like my skin was crawling.  I felt a strong urgency to move the bed, which we did, to the opposite side of the room.  Much better!  Weeks later, I was reading in bed and out of the corner of my eye, I “saw” an electric cord strung mid-air along the side of the room where the bed had previously been positioned.  I got out my dowsing rods, and detected a geopathic zone bisecting the house through this downstairs bedroom.  Other dowsers have described ‘seeing’ or detecting some sort of current in geopathic zones, which could explain my visualization of an electric cord.

To “shield” a house from this noxious energy, dowsers typically bury ‘rebar’, 18-inch iron rods, into the earth on both sides of the house, where the geopathic zone of disturbance both enters and leaves the house (Storozuk, 1992).  It is not known how this works, but dowsers “dowse” the results, and this seems to change the path of the geopathic zone so that it goes around the house rather than through it. 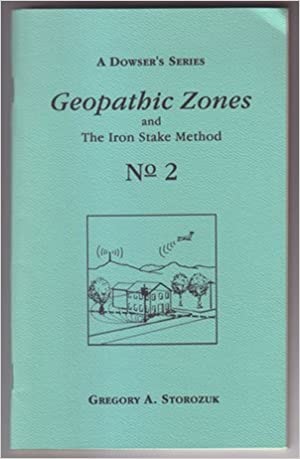 While dowsing the best location to locate the rebar and block the geopathic zone, I felt a strong current linking me, the rods, and the Earth together.  After working with a pendulum for many years, I was surprised by such a powerful sensation working with the Earth energies.

Still I had doubts that any of this made sense.  About a month later, my neighbor next door developed a benign tumor and had it surgically removed.  I was relieved that it was benign, but wondered if I had altered the geopathic zone running through both of our houses, such that it intensified in her house?

Flash forward many years later, I am living in what was once my mother’s house.  I feel a tension and stagnation in this house, a difficulty in moving forward with my life.  One day it occurred to me that I may be living with a geopathic zone once again.  With dowsing rods in hand, I walked the perimeter of the property, and detected three geopathic zones, streams of underground water crossing the property, one of which entered the house and passed through the couch and chair in the TV room, where I felt most stagnant and tense.  Two old women had sat in this TV room chair, on top of a geopathic zone of disturbance, and both had died.  I immediately moved the chair out of the zone, and could feel the difference.  I placed rebar in the ground blocking two of the geopathic zones, running along both sides of the house.  A couple of weeks later, I rechecked the position of the geopathic zones, and found that they were about 6 feet further out, away from the house.

Is there any scientific evidence for such a thing as ‘a geopathic zone of disturbance’?  I searched the PubMed database and could find only a few recent studies.  Augner et al. (2001) found a trend towards poorer well-being reported while working in a geopathic zone.  Hacker et al. (2005) measured the aura strength of individuals in both a geopathic zone and a neutral zone using a gas discharge visualization (GDV) system.  In the geopathic zone, the body aura was statistically smaller than in the more neutral zone, indicating an effect on human physiology.  Bachler cites a number of scientists and physicians, who speculate that some sort of ionizing radiation may be emitted from these zones, which could account for the increase in cancer.  There have not yet been measurements of this earth radiation, but it is possible.  The question seems worth pursuing further.