Human Design is a type of astrology based on the I Ching.  Human Design (HD) charts, like any astrology chart, are based on birth data (birth date, time, place).  HD was purportedly channeled by Alan (Robert) Krakower, (aka Ra Uru Hu).  In January 1987, Krakower had a powerful encounter with “a Voice,” an intelligence far superior to anything he had ever experienced. This encounter lasted for eight days and nights during which he received a transmission of information—known today as the “Human Design System.”

During the 1990s, I received a free copy of the Human Design System software (Maia Mechanics Imaging).  Experimenting with Human Design over the years, examining the Human Designs of family and friends, I have found that it reveals the different personalities of individuals better than the Myer-Briggs Type Indicator, the standard personality test.  Also, it seems to capture and elucidate the energies of relationships.  Unfortunately, a negative aspect of Human Design is that the owners of Human Design are not interested in scientific evaluation of their product.  Is Human Design really a science?  Or is it just reading “tea leaves”?

The science behind astrology is equally controversial.  Recent reviews by Gerhard Mayer (2020) help put this in perspective.  He describes several difficulties of astrological research, including, 1) the impossibility of creating matched groups for comparison due to the complexity of rhythmic astrological variables; 2) the questionable validity of personality questionnaires, which can be distorted by self-reporting; and 3) the role of psi, ESP and/or divination in the process of astrology, necessitating the use of current parapsychology research methods.  Mayer also points out the need for researchers to be knowledgeable about the different astrological practices when designing experiments.  With all this said, Mayer does acknowledges the few positive findings which support astrology as a scientific anomaly worthy of investigation.

Although uncertain of its scientific validity, Human Design astrology has, nevertheless, helped me better understand myself and the people around me.  For example, experimenting with Human Design, I quickly observed that my students fell into one of two groups:  Generators, who bounced into my office asking what they could do, and Projectors, who I had to email and make an appointment to see how their projects were going.  Through further experimenting with Human Design, I discovered that I am a Manifestor, whereas nearly all of my family are either Generators or Manifesting Generators., which could explain my feeling “different” from my family.

When analyzing an HD chart, the first place to start is Type.  Each person is one of 5 types.  The 5 HD Types with their percentage occurrence in the world population are:  Manifestor (9%), Generator (70%, including Manifesting Generator), Projector (20%), and Reflector (1%). Here is how I see these different types:

Generators:  The most common type, they are ‘in their power’, when they are responding to a need.  They often have lots of energy, “Energizer Bunnies”, and can power through tasks pretty amazingly.  They also have a warm, magnetic feel to them, attracting friends and family.  They are the helpers, which may be perceived as a weakness in our society – not so!  They are the Empire Builders, building the houses, keeping the businesses going, working in schools and hospitals, volunteering, etc. – active, productive people.  Many successful U.S. Presidents in the last 150 years are/were Generators:  Clinton, Reagan, Eisenhower, FDR, Teddy Roosevelt, Wilson, Truman, etc.

Manifesting Generators:  A subset of Generators, they have many of the qualities of Generators (e.g., energy and stamina, response to need), but some manifesting qualities as well.  Very successful people, you can find them as owners of their own businesses, as lawyers and doctors and other professionals, as U.S. Senators.  They have lots of talent, consequently, they feel a strong internal pressure to express their talent.  Careerists and policy wonks, they are not as warm and friendly as a Generator, and may seem self-absorbed, even selfish, at times.  Only one U.S. President in last 150 years was a Manifesting Generator, namely, Nixon.

Projectors:  Projectors are ‘in their power’ when they wait for the right moment, the right invitation, to interact and share of their talent.  So, yes, you need to invite them when you want to interact with them!  They are most effective as managers with people working under them.  They seldom act rashly – they are “cool cats”, good in situations requiring a calm, level head.  On the flip side, their need for recognition can isolate them, as they do not like to share the limelight or power.  As U.S. Presidents, Obama and JFK for example, they are able to carry the dreams and projections of a nation.

Manifestors:  Manifestors can act independently regardless of need – they are the ‘wild cards’, bringing in new ideas to rattle the status quo.  They are ‘in their power’ when they are informing others, sharing information and new ideas.  Only a few U.S. Presidents have been Manifestors, namely Ulysses Grant, GW Bush and Trump, and interestingly, all three were ‘hated’ during their terms as President.  Manifestors are often maligned and disliked, as a reaction to their nonconformity.

Reflector:  Reflectors are ‘in tune’ with themselves when they follow the lunar cycle. I have only met one Reflector, a graduate student in Biology.  When I mentioned to her that she was a “moon child” – she immediately pulled out her keychain which was in the shape of a crescent moon.

Regarding relationships, there are Gates in each Human Design chart, and when we connect with someone who has a reciprocal Gate, we create a “defined Channel”, and we are better able to express the qualities of that Channel.  In order words, we are better able to express our own potential when harmoniously linked with another person.  Here is a figure of a defined Gate and Channel from willowrising.co 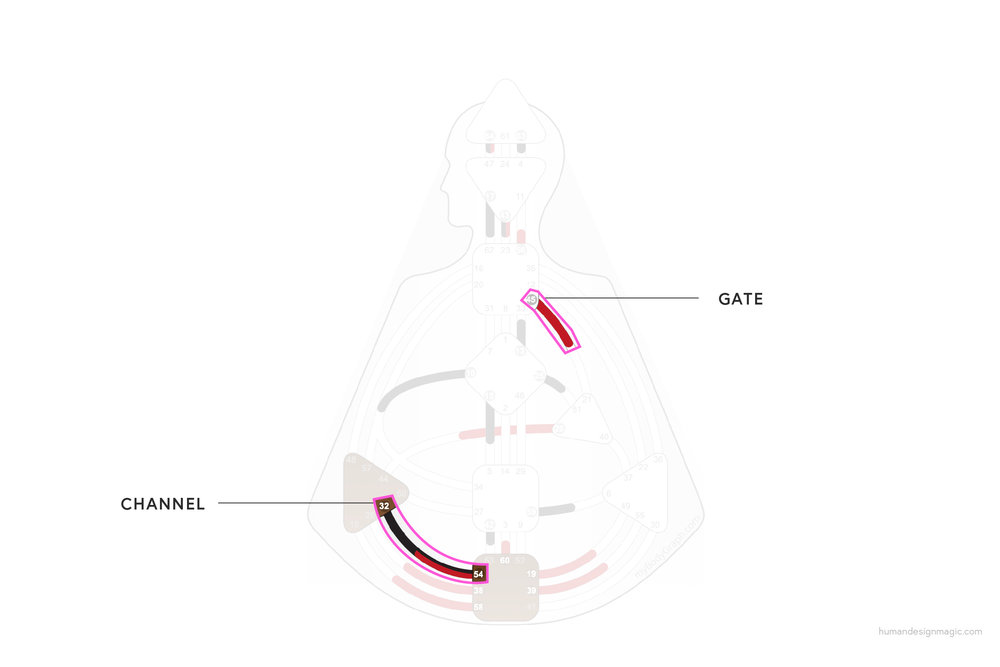 Surprising to me, long-married couples, happy marriages, typically have only a few (2 – 4) connecting Gates.  On paper, a good Human Design marriage looks like two dance partners, light and free.  Society tells us that our partner should “complete” us, make us whole.  So we would assume that there should be many connecting lines between the charts of a married couple.  Not so!  Human Design shows us that wholeness in a marriage is the sum total of all the relationships that the married couple share.  A few Gates connect to our spouse, other Gates connect to Family and Friends, and still other Gates connect with coworkers and the world-at-large.  By not having too many connections with our spouse, we are able to connect more broadly and have more energy for work and family.

What happens if two individuals have a lot of connections (more than 4 or 5)?  Then the relationship is ‘karmic’ and can be stifling.  The individuals in such a relationship are less likely to connect with others and the outside world, because so much of their psychic energy is in the one, ‘sticky’ relationship.  This is evident in some parent-child ‘complexes’ where neither is able to break away and find a more suitable partner.  Thus, the energies of human design help us understand our “karma”, and relationships that may be problematic.

For more information about Human Design, including a free chart, check out the Human Design America website.