Charge-discharge was at the center of psychiatrist Wilhelm Reich’s understanding of orgone, or life force energy. He found that certain enclosures, called orgone accumulators (ORACs), made of alternating layers of insulating and conducting materials, could alter charge and create orgone life-enhancing effects in an individual or substance placed in the ORAC.  Charles Kelley (2004), a student of Reich, notes that the center of an ORAC is low-charge, which is why people feel good sitting inside an ORAC.  Here is what a large ORAC looks like: 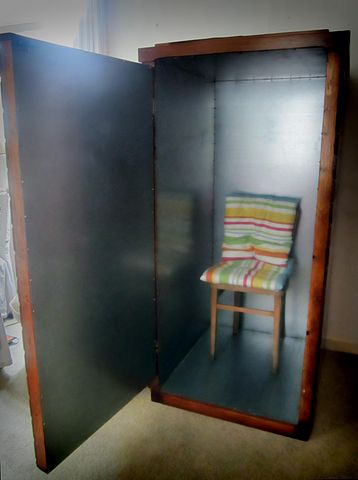 Haldane compares the low-charge “feel” in an ORAC to the low-charge in the environment following a thunderstorm.  I remember one summer here in Indiana where we went 5 or 6 weeks with no rain.  The atmosphere was oppressive (i.e., high-charge).  When the rain finally came, it was healing and felt like a huge release (i.e., low-charge).

Haldane (2014) describes the sensations felt by persons sitting within orgone accumulators, including:

In my survey of healers (Moga, 2017), I found that some of the sensations reported by healers may be due to electrostatic forces, such as:

These sensations are near-identical to those reported inside orgone accumulators (ORACs), suggesting electrostatic forces are operative within an ORAC, but also, further showing that the “orgone” studied by Reich is the same life-force or life energy experienced by energy healers today.

My experience with ORACs is limited to a small ORAC I bought online. I put a magnetometer probe inside the small ORAC to see if any magnetic field (MF) oscillations could be detected, similar to the oscillations I observe during energy healing, but I observed no effect on MF output.

A better experiment would be to measure MF activity in a large ORAC with a human volunteer inside.  I will probably have to build my own, as the materials used in ORAC construction seem to matter.  Kelley notes that effective orgone accumulators are lined with metal, preferably galvanized sheet iron, and then, “thin alternate layers of a highly conductive material like copper, and a material with a high dialectric constant (very good insulator) like mylar”.  He references Greenfield (1974) as a source for Reich’s instructions on how to build an ORAC.

Metal-lined rooms and buildings may also act as orgone accumulators (ORACs). Haldane tells the interesting story of a visit to a lavatory in a gas station:  no windows, swirls of bluish light in the darkness, slight tingling sensation, aluminum walls supported by brick and concrete.  Thus, the outer part of the room was made of non-metallic materials but with a metal, interior lining.  Haldane had the thought that, ‘this is like an [orgone] accumulator’.  Later, he declares, “the lavatory was indeed an accumulator.”

Moga MM (2017) Exceptional experiences of healers: A survey of Healing Touch practitioners and students. Journal of Exceptional Experiences and Psychology 5(1): 24-34.